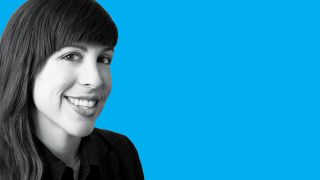 It was two hours but it seemed like two minutes. During a recent trip the Bay Area, I played in a virtual reality arcade. Wearing an Oculus Rift, I flew across South America in Google Earth. I scaled mountains in The Climb. I wielded virtual swords as a fruit ninja. I painted starscapes in Tilt Brush.

I was a VR skeptic before—it’s healthy to hold onto a modicum of incredulity in this line of work—but I was utterly amazed by the experience. After meeting with VR innovators, I am convinced that this emerging technology will profoundly influence pro AV's future. As Dr. Puya Abolfathi, CEO of Visospace, told me: “VR is seeping into everything that we do.” That includes installed audiovisual systems, from VR videoconferencing to enhanced digital signage. Our feature “New Nodes & Modes” explores how new technologies like AR, VR, and IoT are changing the nature of digital signage interactions.

"That’s me on the right, wearing an Oculus Rift in Urban Safari, a VRcade (virtual reality arcade) in San Francisco. Now imagine the possibilities for integrating display systems for more social interactions. VRcades are growing in popularity across the world, specifically in Japan, South Korea, and China."
—Margot Douaihy

That wasn’t the only takeaway from my VR foray in San Francisco. It’s immediately clear that in virtual reality you need to keep softness in your stance. With the Oculus Rift headmount on, to avoid falling as I teleported or leaned, I had to keep my knees and ankles loose, similar to QiGong and Tai Chi posture. In both the AV industry and in a VR experience, even though we cannot see what’s coming next, we have to stay nimble and aware of our surroundings. Just like in VR, audiovisual pros need to stay alert to the constraints and possibilities of the spaces we inhabit.

To that end, in “The State of the AV Industry: Adapt or Die”, contributor Justin Rexing reads the technological tea leaves, and he has reached a conclusion about the role of the traditional AV systems integrator. “As a manager and an independent consultant with years on the front lines of pro AV, I can assure you: If your company is not willing to change, you will die. You have to be agile and adaptive.” Have you adapted to stay relevant in your career path? What is your DQ (Darwinian Quotient)?

Keep that spring in your step this autumn and join us at the AV/IT Leadership Summits in New York City (Nov 9-10) and Washington, D.C. (Nov 30).

Margot Douaihy is the editorial director of AV Technology and part-time fruit ninja.