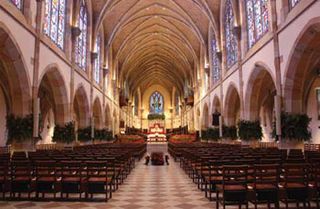 SEWANEE, TN—Known as “The University of the South,” Sewanee is a small, quaint college with a serene campus located in Sewanee, TN. At the heart is the beautiful All Saints’ Chapel. As wonderful and pristine as the chapel is, it’s also very difficult to get audio under control.

While the large organ sounds brilliant in the large space, accented by a deep reverb that adds an enormous amount of depth and majesty to the music, spoken word was a different story, According to installer Ron Jones of Manhattan, KS-based Ron Jones Audio, it’s at times almost impossible to understand someone speaking as close as 30 feet away.

“It’s a very reverberant space with a lot of stone and hard surfaces,” Jones said. “There isn’t a lot of diffusion or absorption. That audio just continues for several seconds as it has an average RT60 of 6.5 seconds.”

After working with Sewanee for many years, he was finally tasked with resolving the speech issues within the facility. “The mission was to produce speech clarity throughout all seating areas in their various configurations with minimal aesthetic impact, “ Jones explained. “This required a highly directional loudspeaker system that blends into the stonework as much as possible. Also, we had to be very specific about loudspeaker zoning, so that unoccupied areas aren’t being filled with reinforced audio.”

Jones specified and installed 21 of SLS Audio’s LS 6593V2 loudspeakers. “Anyone who knows SLS Audio knows that their claim to fame is their smooth-sounding ribbon tweeters,” Jones continued. “When these units are stacked vertically, you achieve precise control in the vertical plane, which means you can be very meticulous about coverage, keeping unwanted reinforced audio off the offending surfaces. “

Jones used eight stacks placed strategically around the venue and made sure that all of the seating areas were in the direct field, with no one left sitting in a reverberant field.

Another key to achieving this result was DSP. Jones chose Lectrosonics’ ASPEN SPN1624 so that he could control all of the zoned loudspeakers independently, creating coverage only in the seating areas that are occupied.

“I love the ASPEN as it allows me the flexibility to control this system in a way that’s easy to operate both with manual and automatic microphone mixing,” Jones said. “It has 16 inputs and 24 outputs, along with multiple configuration presets that are extremely helpful to the end-user. Basically, I set it up in a way that, with the touch of a button, allows reinforced audio to cover only the seating areas that are occupied, which significantly helps with speech clarity.”

In addition to his loudspeakers and DSP, he had several other pieces of gear that allowed him to achieve his desired result. Specifically, he went with QSC CX-series amplifiers, Yamaha LS9-16 digital audio console, Galaxy Microspots, and SurgeX power control

After careful planning and execution, in the end Jones was able to get everything right where he wanted, and delivered a sound so precise and accurate, that it was finally able to keep up with the stunning visual experience that All Saints’ Chapel provides.