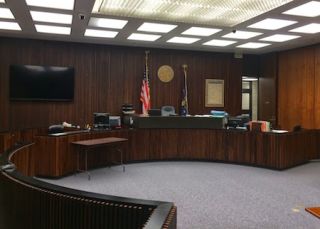 When jurors would arrive for duty at the courthouse of Lake County, IN, a few years ago, they were often taken aback by the outdated facilities, most of which had remained unchanged since its opening in the 1970s.

“A lot of jurors watch CSI shows like Law & Order, and they’re expecting technology like they see on TV,” said Mark Price, chief deputy of the Lake Superior Juvenile Court. “Well, you walk into a courtroom for a criminal proceeding where a guy’s on trial for his life, and they’ve got a rolling chalkboard. You kind of get underwhelmed.”

Things have changed tremendously at Lake County’s courthouse, which serves the second most populous county in the state with over half a million residents. Located along the shores of Lake Michigan and bordering Illinois and the Chicago metropolitan area, the Lake County court system has been receiving a technological makeover befitting of its stature.

One of the four criminal courtrooms in the Lake County Courthouse, with 80-inch wall TV and a host of technological appointments.

All four criminal courtrooms in the building are now decked out with technology, each with an 80-inch wall-mounted flat-panel, Symetrix SymNet Edge audio systems, Crestron touchpanels on the judge’s and court reporters’ desks, and AppleTV units on the defense and prosecution attorneys’ desks, so they can share evidence from their iPads or laptops on the wall television.

It all began in early 2013, when Judge Stefaniak asked Price to look into a grant from the Indiana State Court that dealt specifically with technology. Within months, the operation was underway. For an integrator, Price sought out Rick Cannon and his company, Technology Consultants Group, or TCG, which had experience with courtroom integrations.

“The installation had to be custom tailored for the courts and how they use it,” Cannon explained. “We hooked up a complete wireless system with an access point, so we have every courtroom on a separate network, isolated from every other courtroom for security. Each room is authenticated with passwords and devices that the court has to give to whomever the practicing attorney is.”

According to Price, the Crestron control system on the judge’s desk also addresses an important legal concern that arose from the ability of attorneys to present evidence on the wall screen. “What you worry about with the technology is the rules of evidence and having mistrials because something was shown that shouldn’t have been,” he said. “So when the judge uses the Crestron touchpanel, he’s the one that authorizes who’s going to be showing what evidence, and for how long.”

For the audio integration, Cannon chose the Symetrix SymNet Edge Dante-scalable DSP, outfitted with an acoustic echo cancellation (AEC) card and its associated processing capabilities. A cost-effective SymNet xOut 12-output expander connects to the SymNet Edge frame via Dante and provides the additional outputs needed for the courtroom’s many necessities, and Dante scalability ensures that future changes and additions will be easy to accommodate.

Along with the Symetrix system, Cannon and his team installed a Crown amplifier for the seven Shure microphones in each room. “We broke the system up into three zones,” Cannon explained. “One zone for recording on the FTR (For the Record, a recording system that all the courts use), one zone for audio within the room, and another zone for the assisted listening device the court reporters use to listen in critically on either the judge, the jury, the defense, prosecution, podium, or the stand mics.”

Other equipment used includes an Elmo system to look at evidence on the wall TV, a WyreStorm HDMI switcher, Antex Electronics DMX-8 recording mixer for courtroom recording archiving, and Samsung flat-panel on the desks of the judge, prosecution, and defense attorneys.

In the future, the court will be implementing a system called video arraignment, through which inmates from jail can be interviewed remotely using cameras and Dante remote microphones and loudspeakers in a prison booth, saving time and reducing the costs and risks involved with prisoner transport.

“The reception to the technology has been really, really good,” Cannon said. So good, in fact, that since completing the remaining criminal courtrooms, TCG has been in the process of replicating the integration in the city and county courtrooms as well.

Now, for Lake County residents, jury duty can feel a little more like a role on a TV drama.

Matt Pruznick is associate editor for SCN and Residential Systems.