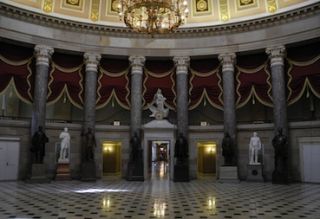 Connecting both houses of Congress, the Rotunda has been described as the "symbolic and physical heart" of the Capitol, and is used as a backdrop for public and ceremonial events. At 96 feet (29m) in diameter, and just over 180 feet (55 m) high at its peaked canopy, it's not hard to imagine the type of acoustical challenges the space presents.

"It's always been a problematic space," said Tom Jones, engineer with Baltimore, MD-based Design and Integration, Inc. "It's got about a nine second reverb time, and vocal intelligibility is just a mess."

Given the building's landmark status, there was no room for any sound system design that would alter the venue's aesthetic. "Requirement number one was that nothing could be mounted permanently," says Jones. Design and Integration's solution was to create a portable system that could be quickly and easily moved into place, based around Renkus-Heinz Iconyx digitally steerable arrays.

"They don't hold high-profile events more than once or twice a month, but when they do it's usually top-level government officials - in the past that has included the vice president, the Speaker of the House, or a visiting dignitary," Jones said. "The events are televised on C-Span, so they really need a system that's highly intelligible with low visibility."

The system comprises four Iconyx IC16-R-II arrays, each located at 90 degrees apart along the room's circumference. "One of the requirements was that the speakers had to be located at the perimeter, to be out of view of audience and cameras," said Jones. "The Iconyx was great - very narrow and low-profile."

Setting up the Iconyx cabinets on tripods and positioning them is a quick and simple procedure, says Jones. "We've tuned the beams downward, at ear level with the seating, and away from the walls and dome."

Aside from the Rotunda's acoustics, Jones says another challenge in putting together the sound system is simple logistics. "The space is a major tourist attraction, and at any given time you've got literally hundreds of people walking through there," he explained. "When we were doing the demo, we had a five minute window right after closing at 5:00 pm, So we were setting up the system while the place was packed with tourists."

Adjacent the Rotunda to the south is the National Statuary Hall, a semi-circular space that was the House of Representatives chamber until 1857. As Jones observes, the Iconyx system's portability enables them to set it up in the Statuary Hall just as easily. "We're using a similar configuration, but it's a smaller space and a bit less reverberant, and we can cover the whole space with a pair of Iconyx cabinets. We've set up presets so they can easily choose the space they want."

Jones reports the system has been a tremendous improvement. "The intelligibility factor is far superior to anything they've used in there in the past," he said. "And being able to cover the entire space with only four self-contained systems is a huge time-saver."