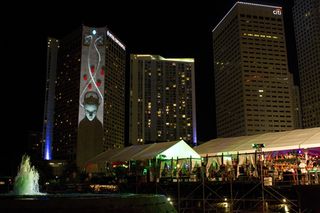 Barco teamed up with broadcast and event producer SenovvA, to create the visual centerpiece for the Ultra Music Festival in Miami, Florida. The partners delivered a 3D projection mapping display, entitled “Red Bull Mind Meld,” which covered 29 floors of the Intercontinental Miami Hotel exterior with animated imagery for three nights during the festival.