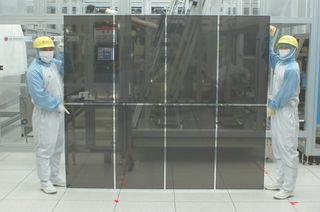 Sharp Imaging and Information Company of America (SIICA) unveiled its full line of professional LED-backlit LCD displays, now available in screen size classes of 60-, 70- (69” diagonal) and 80-inches. Sharp’s 60” (diagonal) PN-A601 is designed for shopping malls, transportation hubs, college campuses and sports and entertainment facilities where high-ambient light may be prevalent. This 60" (diagonal) LED-LCD monitor offers ultra-high brightness of 2,000 cd/m2 for superb visibility, even in brightly lit and high ambient light settings. The PN-A601 also provides exceptionally high image quality in full 1080p HD, with the energy savings of a full-array backlight in combination with local dimming. Much of the PN-A601’s performance – including outstanding black levels, high contrast and superb energy efficiency is due to local dimming of the LED backlight. Local dimming allows specific groups of LEDs to be dimmed for greater control of brightness and darkness in different areas of the screen. Since LEDs in a black area of the screen image can be independently turned off, local dimming can help to considerably reduce power consumption. This helps the PN-A601 deliver significantly better contrast (up to 1,000,000:1 contrast ratio with local dimming set to HIGH) and brightness (up to 2,000 cd/m2) compared to conventional LCD monitors, while utilizing less power.

DynaScan Technology introduced two new 55-inch high bright and ultra-high bright narrow bezel professional LCDs, the DS55LT4 and DS55LT6. The DS55LT4 features a brightness rating of 2,500 cd/m, while the DS55LT6 sports a maximum brightness of 5,000 cd/m. DynaScan has applied its expertise in LED optics to achieve daylight viewable images up to 5,000 nits, making them easy to view even in direct sunlight applications such as storefront windows or outdoor enclosures. The displays feature a local dimming LED back light technique for a remarkably high contrast picture as high as 1,000,000:1 (dynamic). With direct local dimming, darker areas of an image receive less backlighting than lighter areas, as opposed to CCFL and edge-lit LED backlights which illuminate an entire screen at all times causing blacks and dark areas to appear washed out. The DS55LT4 and DS55LT6 feature a narrow 11.5 mm bezel for tiled video wall applications. With built-in video daisy chaining, a single 1080p source can be used on video walls up to 6x6 in size without the need for any additional external video wall controller. To increase performance and prolong the lifespan of the display, the DS55LT4 utilizes a fanless thermal management system. Heat generated by the display is radiated away from high temperature areas while a sensor continuously monitors the internal temperature to protect the system from overheating. All of this is done without the use of any fans, resulting in silent operation and greatly reducing the potential of mechanical failure. This is especially beneficial in areas with a lot of dust which can eventually obstruct a vent and cause the display to overheat.

Planar Systems, Inc. introduced at DSE the Mosaic Video Wall System, providing three flat panel tiles, including a new square LCD. Planar Mosaic allows designers to integrate three different LCD tile sizes and shapes—including a truly square LCD tile measuring 21.6 inches on the diagonal. The Planar Salvador is a 1:1 aspect ratio tile measuring 15.6 inches / 39.5 cm on each side, that allows for creative installation and is akin to the shape of other building materials. The Planar Vincent™ (48 inches / 122 cm wide) and the Planar Pablo™ (40 inches / 103 cm wide) are both rectangular LCD tiles. Utilizing proprietary Mosaic Ensemble software and hardware, the tiles can be rotated at virtually any angle and mounted in any position, encouraging designers to experiment with negative space while extending project budgets. The Planar Mosaic video wall system features LED backlit displays, consuming less energy than traditional LCD displays. The video tiles boast a slim installation depth of less than 4 inches (10.16 cm), which is compliant with the Americans with Disabilities Act (ADA). Planar Mosaic will be available for purchase through Planar’s worldwide network of authorized resellers in spring 2012.

A 47-inch LED backlight LCD panel from LG Display was on display at the DSE show. The panel utilizes a fiber optic display with 2000 nit high-brightness (five times brighter than a general TV) resulting in images displayed outdoors being much brighter and clearer than ever before. Also, the 2000 nit high-brightness panel uses Local Dimming technology to reduce power consumption to levels lower than that of existing LCD panels by turning off the darker parts of its backlights.
Additionally, LG Display’s LCD panels employ a proprietary liquid crystal structure technology that enable the screen to continue showing images even when the surface temperature of the panel rises to 110°C. Conventional LCD panels begin to turn black when surface temperatures exceed 75°C, and also reach 85°C if left outdoors for 30 minutes at an outside temperature of above 30°C. LG Display’s solution results in a public display technology made much more practical for the everyday environment.

Also on exhibit at DSE was LG Display’s 26-inch see-through panel embedded with IPS (In-Plane Switching) technology and featuring HD resolution (1366X768). The panel includes a brightness control function for sunlight when being utilized as a window, and can also work as a display during the night via an embedded LED backlight. The panel can serve a variety of public display purposes and is also capable of being produced in larger 40 to 50-inch sizes with full HD resolution (1920X1080).For more information: www.lgdisplay.com

This concept model for a next-generation vending machine, which features a see through display, was developed by Sanden, a large manufacturer of vending machines, in conjunction with Okaya Electronics and Intel. The unit was on display at the Scala booth at DSE. The model has a vertical, 65-inch, Full HD transparent display. The products behind the display can be seen through the glass, and you can simultaneously see high definition text, pictures, and Flash animations on the display.