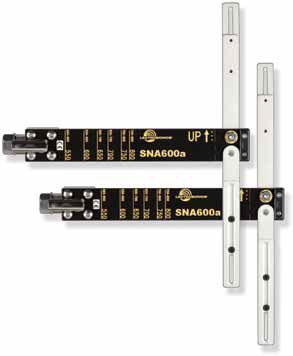 The subject of antenna placement is often overlooked in installations, particularly in AV applications. The worst case scenario is where the supplied whip antennas are attached to the receiver, which is then located in a metal rack. Not much operating range can be expected from such a poor setup. Another common mistake is to use directional antennas or even highly directional units in situations where such antennas actually hurt rather than help. Finally, RF amplifiers are often employed, either built into the antennas or sometimes as separate devices, when they are not needed. All of these above described scenarios will cost you performance, and in some cases, money.

Lectrosonics SNA600a UHF dipole antennas created for a wide range of wireless microphone installations With antenna choice and placement, a knowledge of the basics will help any installer or user of wireless mic systems. First of all, line of sight is important but not always totally necessary. As long as the objects between your transmitter/s and receiver/s are either transparent to RF energy or at least sparse enough for the transmitter/s signals to propagate, you can probably get a good signal.

What does this mean, and what is not transparent to RF energy? Metal is the least transparent, followed by stone and concrete. If you have a metal panel, wall, or surface between your transmitters and receiver antennas, you may have problems. Thick, reinforced concrete is also problematic.

For the most part, as long as your transmitters and receivers are in the same room, you should be in good shape, even for larger rooms because the signal from your transmitter/s will bounce around the room quite a bit.

The next common problem has to do with antenna diversity placement. Diversity is an important consideration for receiver antennas, especially now when just about any receiver, and certainly any rack receiver from a reputable manufacturer, has diversity.

What does diversity mean? Since the transmitter signals bounce around as mentioned above, it is possible to have different signal path lengths, i.e. out of phase signals arrive at any given receiver antenna from any given transmitter. As the person with the transmitter moves around, these path lengths change thus there is the possibility of a complete phase cancellation (“multi-path null”) at one of the receiver antennas. By having a second antenna, the receiver/s can choose between the antenna with the better signal.

However, if the receiver antennas are placed too closely together, it is almost as if there is only one antenna. The basic rule is to have spacing of at least one wavelength (about a foot at UHF frequencies) between the two antennas. RF theory shows that a greater spacing is beneficial; in fact, having the antennas 10 feet or more apart will work much better than one foot spacing.

Choosing the correct antenna can save money and improve wireless performance. Most receivers are supplied with a pair of “whip” style antennas (as mentioned earlier). They are generally tuned to be 1/4 wavelength, or, in some cases, 1/2 wavelength. These whips can work very well attached directly to your receiver/s. However, they are generally not designed to be used remotely via coax cable.

A better choice for most installations is the dipole type, which has an omnidirectional pickup pattern in the lateral plane. These have a built-in ground plane and thus can be remoted easily. They are tuned, however, thus need to be chosen and set up correctly for best results. The directional types, including the common LPDA, can be useful by using the rear null to block unintended signals (e.g., TV transmissions) while using the frontal gain to improve intended reception. Generally, directional types are best for longer ranges and narrower pickup angles; dipoles are better for wider pickup but perhaps less distance.

Another common mistake is to use amplified antennas or RF amplifiers to “boost the reception.” Such devices are really only designed to overcome the loss of signal when using longer cable runs. Avoiding their use when not needed can save money and improve the end result.

Karl Winkler is the director of business development at Lectrosonics.