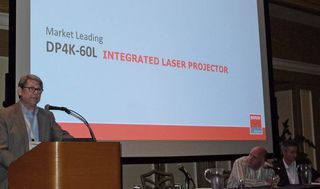 Remember, this battle is not about “hybrid” laser/LED projectors that put out 1 to 7K lumens. We’re talking about huge milestones, with a single projector putting out up to 60K lumens or more.And with the projectors designed for smaller screens (NEC) cranking out 20K plus lumens.

Bill Beck (at podium), who joined Barco only last week, represented Barco's Laser Projector offerings at the Laser Projector session at the Display Summit Monday, while (left to right, seated, Richard McPherson of NEC, and Don Shaw of Christie prepare to explain their companies Laser projectors.

Richard McPherson of NEC Display Solutions– in the unique position of representing a product very different than the much brighter and much pricier Barco and Christie offerings– again stressed the compact size of the new NEC Phosphor Laser projector, its lower cost, and its regulatory-friendly status. In April McPherson said that he thinks NEC will ship “a few hundred” units this year. He reiterated that again today. In Q&A McPherson said that they are “looking in particular at the Latin American market for growth.”

Don Shaw of Christie explained the advantages of the 6P laser setup, that allows for a 42-45% light efficiency (amount of light leaving the “lamp” that actually makes it through the 3D filtering to land on the screen). Shaw stuck to his two-projectors for 3D guns today, as Christie and Barco have been sparring fairly publicly for the several months over the one (Barco) vs. two (Christie) 3D configuration.

Bill Beck of Barco, being a Barco employee for days only, gave a more 40,000 feet assessment of the market and the technology. Beck explained that the 6 primary Barco Laser 3D projector solution saves the cost of 60 lamps over life of a projector

60K lumen. This is a 6-P laser configuration, that’s coupled with a Dolby 3D color separation system. Barco is stressing a one-projector 3D solution (left and right eye sequential images). And he said that the Barco projector can go 30,000 hours, at 80% of max power. (A single Barco DP4K-60L projector can do up to 24 meter wide screens with 7fL 3D, with 1.8 gain; or up to 17 meter wide screens with 14fL, with 1.8 gain.)

In fact, all the presenters touched on the lifespan question, and while the math is a bit different for each solution, all the projector manufactures are taking advantage of Laser’s super high lumen output by actually dialing down that output in favor of brightness consistency over the life of the projector.For example, NEC’s McPHerson said “65% of output is all you need for a 20’ screen… and you can keep that going forward for the lifespan.”

And when NEC says their projector has a 20K hours lifespan, what that means is that after 20,000 hours, you still have 50% of brightness left.

When Bill Beck of Barco, referring to different ratings floating around, asked Don Shaw of Christie, “is the Christie projector, 72K lumen, or 60K lumen?” Shaw replied "we’re saying 60K… but we can pump more…. I’ve seen systems with 100K lumens”. Shaw was confirming what all the big three manufacturers are doing: using a kind of sliding lumens output, depending on the need of the room, to get maximum efficiency not just max lumens.

Barco, Christie, and NEC will no doubt be doing a combination of public and private showings of high lumen laser projectors at InfoComm in Las Vegas. If you have not seen one of these big guns, seek one out and be prepared to be amazed.