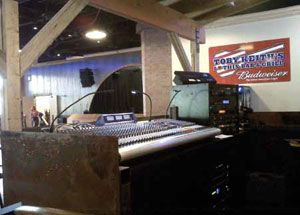 AUBURN HILLS, MI—What do you get when you combine a hitgenerating country music singer, a team of cowgirls/waitresses dubbed as some of the ‘hottest in the business,’ loud music, live bands, plenty of booze, and some good, old-fashioned downhome cooking? A recipe for a successful theme restaurant.

Or so think the management team behind Toby Keith’s I Love This Bar and Grill, a chain of eateries named after the recording artist’s hit single. They must be on to something: With locations already boasting shoulder-to-shoulder clientele in several cities, the enterprise is continuing its expansion with sites announced around the country.

A music-inspired restaurant can’t succeed without great sound, and when Waterford, MI-based loudspeaker manufacturer ISP Technologies learned that Toby Keith’s I Love This Bar and Grill was coming to neighboring Auburn Hills, it set out to provide just that. Through its relationship with nationwide systems contracting firm AVI-SPL, ISP’s line of high definition line arrays and subwoofers are integrated into the Auburn Hills and Denver locations, as well as several others.

For AVI-SPL, the first project in this rollout was the Auburn Hills location. The venue features a large bar and dining area, as well as two VIP rooms and a stage for live performances, including touring acts. AVI-SPL installed ISP HDL 3112 line array speakers and ISP XMAX 218 front-loaded subwoofers to achieve fidelity, clarity, and solid mid-range. The HDL 3112 loudspeakers cross over at 700Hz from the subwoofers to a three-inch midrange compression driver—a development designed to provide greater pattern control, improved projection and better clarity for vocals and instruments. The HDL 3112s are also fitted with three 1.75 high-frequency polydiaphragm compression drivers crossed over at 2.8Hz for smooth high frequencies. The front-loaded XMAX 218s are dual 18-inch subwoofers with four-inch voice coils that are equipped with highvoltage D-CAT power amplifiers that deliver an average of 2,000 watts (with a peak of 4,000 watts). The -3dB frequency response is 35Hz to 100Hz.

“Not only does ISP provide the main PA; it also provides a very effective distributed restaurant sound system,” said Ward LaDuke, who oversaw the project for AVI-SPL at the time, and who is now with another company. “ISP has a fantastic high-definition, distributed speaker line, all based on Cat-5 technology, which allows the distribution to be so much easier to install and operate, and it sounds amazing, because it’s not 70-volt.” This enabled the integrator to avoid the “tinniness” that LaDuke associates with 70-volt speakers. “We were able to provide 8-ohm sound quality over Cat-5 with the technology that ISP has developed.”

In addition to the ISP system, AVI-SPL installed a Soundcraft mixer and wireless microphones by Shure Incorporated. The lighting system features a combination of ETC and Elation technologies, including moving lights and LE Ds. “We were trying to go as green as possible, and when you have LE Ds and powered speakers, you are going green, just because of the way the technology is,” LaDuke explained. The video system—which in the Denver, CO location features over 60 displays—is comprised of Da-Lite screens and BenQ projectors, with televisions by LG.