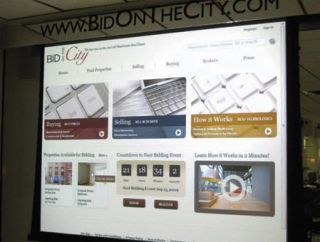 CitiNet Consulting set up a podium and a ceiling-mounted Hitachi CP-X809 projector, displaying properties on a Da-Lite HC Da-Mat Tensioned Contour Electrol screen 14 feet from the projector in the main room at the bidding center.

Bid on the City is a real estate trading platform that offers online and in-person bidding on residential and commercial properties worldwide. Bid on the City presents a level of transparency for buyers and sellers not currently offered through traditional real estate brokerage companies. Properties are sold 30 days after being listed with buyers bidding in real time on Bid on the City’s platform, negotiating the best possible price. Bidding occurs simultaneously online and in person at the bidding center. The bidding is streamed live globally via the internet.

CitiNet Consulting set up a podium and a ceiling-mounted Hitachi CP-X809 projector, displaying properties on a Da-Lite HC Da- Mat Tensioned Contour Electrol screen 14 feet from the projector in the main room at the bidding center. A ceiling-mounted CPX809 projector emits 5000-lumen images behind a 40.25- x 53.75-inch Da-Lite Halo screen at the front window of the Bid on the City store location, creating a large and continuously changing display of Bid on the City’s properties. “When we designed the front of the store, we were enamored by the Hitachi projector in the bidding center,” says Raymond Villani, managing director for Bid on the City. “We wanted to be cutting-edge, not just for the sake of being cutting-edge, but in an effective manner.

“I believe BOTC’s business model proves that challenging economic conditions breed innovation. If there are ways for us to market ourselves differently and more effectively to distinguish ourselves from the competition, we see that as a worthwhile investment,” Villani says. “Our digital signage solutions utilizing the Hitachi projectors exemplify that approach.”

Almost immediately, the front window projection display had a positive impact on Bid on the City’s business.

The project also exemplifies the ongoing convergence of IT and audio-video technologies, which has provided a challenge and an opportunity for companies like CitiNet Consulting to expand their range of services. “The majority of our business has been networking and IT for businesses, but this technology is now extending to video hardware, providing us with the ability to grow the scope of our business to include those products and services,” says Denis Kozlov of CitiNet Consulting.

For more information on Bid on the City, visit www.bidonthecity.com