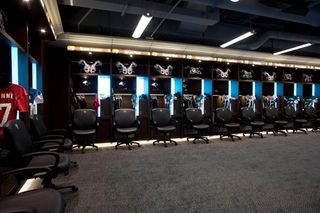 “The team came to us with a simple request,” Cooper said. “They wanted a rockin’ sound system with plenty of screens to go with it. They really wanted to give the players a place to retreat to and enjoy. Because we pride ourselves on building long-lasting systems, I place a premium on reliability and quality. When I looked at my options for processing, the Symetrix Jupiter 8 DSP was an obvious choice. It’s powerful and easy to set up. And since I’ve already used a number of Jupiters on other jobs, I know they’re solid.”

In addition to the literal locker room, the new system covers all of the more extensive facilities that go with it, including the showers, the drying area, the restaurant, the cool- and hot-tanks, the therapy room, the equipment room and the manager’s area. All thirty-three of the inputs, only two of which are audio-only, are fully matrixed such that any input can be selected in any zone. Apart from the locker room itself, which uses a DBX Drive Rack processor, the rest of the system relies on the Symetrix Jupiter 8 DSP, which takes its inputs from a Crestron control and matrixing system. Its eight outputs feed separate zones. QSC amplifiers, loudspeakers, and subwoofers fill the audio portion of the new system.

“Despite the complexity of the Jaguar’s new A/V system, programming the Symetrix Jupiter 8 DSP was easy,” said Cooper. “I used the Sound Reinforcement #6 App, which gave me great sounding equalization and dynamics.”