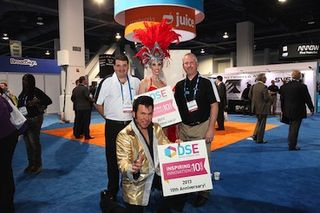 Chris Gibbs, president of Exponation, LLC, which produces Digital Signage Expo said, “Not only was the show a success by all quantitative measures, but the quality and number of end-users who attended helped create wonderful energy and generated very positive comments from the majority of exhibitors. Exhibitor satisfaction was so high that we are pleased to report that the show floor is close to 80 percent sold out for 2014.”