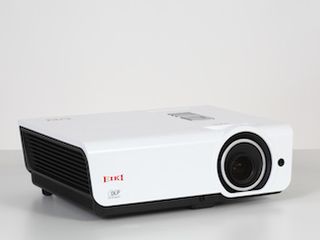 The What: Eiki International set loose its EK-402U 4,700 ANSI Lumens / WUXGA / DLP Projector. Featuring 4,700 ANSI lumens brightness with 80% uniformity and a 10,000:1 contrast ratio, the new Eiki EK-402U is a viable projector choice for meeting rooms and similar environments where maximum versatility is required.

TheWhatElse: As the company’s replacement for the EIP-U4700, the EK-402U provides Native WUXGA resolution and is compatible with inputs up-to UXGA and WUXGA. As part of its support for both analog and digital video input in all color standards up-to 1080p, the EK-402U provides two HDMI inputs and DisplayPort Digital connectivity with HDCP compliance.

The Eiki EK-402U is also compatible with Crestron RoomView and AMX Device Discovery Technology. Being compatible with these protocols allows the projector to be controlled directly from the same meeting room control panels or tablets used to adjust lighting, raise or lower screens, and adjust other aspects of the meeting room.

The Eiki EK-402U projector’s imaging system uses a 0.67-inch DMD DLP chip. The projector also has a Throw/Width Ratio ranging from 1.39-2.09:1. The EK-402U’s incorporated lens provides mid-range manual zoom and focus with fixed image offset. Digital zoom ranges from 50% to 400%. The system displays both 4:3 and 16:9 aspect ratios and supports most HDTV resolutions.

“As the successor to the very popular EIP-U4700, the EK-402U offers 5 times the contrast ratio and a much wider throw to width ratio that allows for easier placement for both new and upgraded installations,” said Steve Rubery, national sales manager for Eiki “This series has also has proven very popular as a rental projector due to its brightness and multiple input capabilities.”

TheBottomLine: The projector carries an MSRP of about $2,500 and is available now. The projector ships with a quick start guide, an owner's manual on CD-ROM, a VGA computer input cable (D-sub15 to D-sub15), a 6foot (1.8m) detachable power cord, a soft carry bag, and a remote (with 2 AAA Batteries).