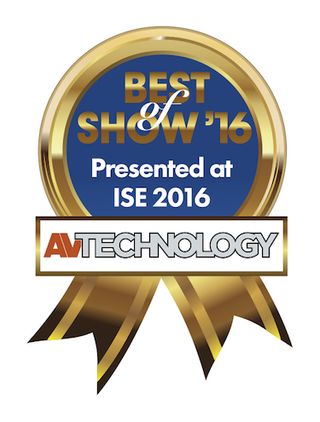 DisplayNet is a new concept for AV distribution that uses 10GbE Ethernet technology to switch, extend, and distribute uncompressed AV signals in real time with resolutions up to 4K (UHD). DisplayNet supports a wide array of applications including point-to-point extension and complex matrix switching, as well as video wall and multiviewer* displays.

DVIGear exhibited DisplayNet at the recent ISE 2016 tradeshow in Amsterdam, NL. AV Technology recognized DisplayNet at ISE 2016 with a Best of Show Award. Margot Douaihy, Editorial Director of AV Technology, wrote, “In a field dominated by innovative solutions, these winning products mark the best of the best in the global pro-AV marketplace…We asked our expert judges at ISE 2016 to evaluate each product based on the proposed value proposition/ROI, richness, and relevance of the feature set, perceived ease of installation, ease of management, and user friendliness." The judges declared, “DisplayNet overcomes the limitations of proprietary matrix switchers by using off-the-shelf 10GbE Ethernet technology to deliver uncompressed 4K video with zero frame latency.”

The DN-100 Series is the first in the expanding line of DisplayNet AV-over-10GbE products. The DN-100TX transmitter accepts multiple signals such as HDMI (with embedded audio and HDCP), analog stereo audio, bidirectional IR, RS-232, and 1GbE Ethernet and transmits them over a 10GbE link up to 328 ft. (100 meters) using a single CAT6a or CAT7 cable. This link is then distributed via a network switch to the receiver unit, which provides all the signals for output at the destination.

The DN-100 series supports uncompressed video up to 4K /30p (4:4:4) and 4K /60p (4:2:0) with zero artifacts and zero frame latency. Video signals may be simultaneously routed in point-to-point, matrix switching and video wall modes all in the same system. For more flexibility, each signal type (video, audio, IR, RS-232, etc.) can be routed independently. Other features such as audio embedding and de-embedding are also supported. The DN-100 series includes DisplayNet anagement software and external API server to enable these units to be integrated into new or existing systems. The DisplayNet DN-100 Series transmitters and receivers are shipping now and are available starting at $995 (USD) MSRP per end point. More DisplayNet products are planned for launch in Q2 of 2016.