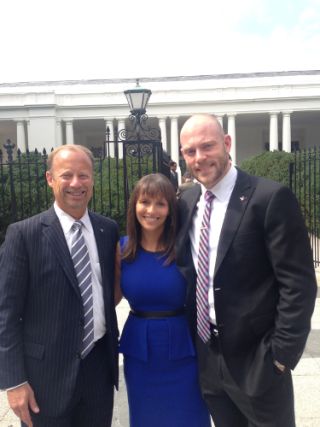 "Sexual violence isn’t just a crime", said President Obama, "It is a civil rights violation." The campaign, being launched in partnership with Generation Progress, will complement efforts schools should be undertaking to hold perpetrators accountable and assist students who have experienced sexual assault.

"It is absolutely unacceptable that 1 in 5 women and 1 in 16 men on American college campuses today are victims of sexual assault", said Rachel Gerrol, Executive Director of PVBLIC Foundation, "We at PVBLIC are proud to work with the White House in the fight to assure college campuses are a safe place for all students to study, live and pursue their dreams."

As a public awareness and education campaign, "It's On Us" aims to fundamentally shift the way people think about sexual assault, by inspiring everyone to see it as their responsibility to do something, big or small, to prevent it.

“From sports leagues to pop culture to politics, our society does not sufficiently value women,” President Obama said. “We still don’t condemn sexual assault as loudly as we should.”

The campaign reflects the belief that sexual assault isn’t just an issue involving a crime committed by a perpetrator against a victim, but one in which the rest of us also have a role to play.

As strategic media outreach partner for "It’s On Us," PVBLIC aggregated in-kind donations from leading media companies totaling over 1 billion media impressions for the campaign nationwide and recommended the award-winning advertising agency Mekanism to develop the campaign's concept, creative and design. The "It's On Us" PSA, produced by Mekanism, features Jon Hamm, Joel McHale, Kevin Love, Kerry Washington, Rose Byrne, Questlove, Common, Randy Jackson and Mayam Bialik as well as powerful statements from both President Obama and Vice President Biden encouraging people to visit itsonus.org and take the pledge to "not be a bystander." The PSA has garnered over 2 million views in the first 4 days since its release.

PVBLIC's partnership with the Digital Place-Based Advertising Association and their member networks led to donations from On-Campus Media & Campus Media Network which together include reach to nearly 700 college and university campuses. Member network Zoom Media donated ad space reaching young adults in over 10 national markets through digital screens in bars and lounges and member network Verifone will deliver "It's On Us" PSA's on displays in taxis in 9 markets nationwide.

Screenvision and National CineMedia expand the reach of the "It's on Us" PSA to movie theater audiences on nearly 7,000 screens while Access Sports Media has donated advertising space in 8 professional sports stadiums across over 8,000 screens.
Lamar has donated ad space to It's On Us on 100% of their digital billboards across the country and The Cross River Network donated digital screens to run the "It's on Us" PSA on each of 7 ferry routes running between New York City and New Jersey.