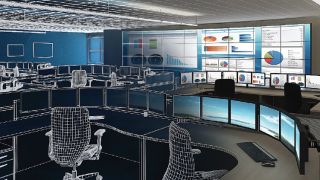 Should command and control centers be equipped with 4K and 8K video systems—and how should you go about it?

Take it from a long-time veteran who saw engineers use vector scopes to dissect problems in SD broadcast centers, and who required major doses of caffeine to track icons on monitors at a Sprint Net Ops facility without incurring migraines.

Today, I support mobile command centers, social media control centers, storm centers, and corporate media centers. What they all have in common are dedicated stations to allow SME’s to focus on their own specific duties, and a large display wall that supervisors and directors can scan, switch content to and manipulate layouts so everyone can succeed.

Focus intently on monitors like these all day, and tell me you don’t want the highest possible resolution that’s easiest on your eyes.

We are all familiar with this very odd graphic comparing the three high-def resolutions.

This graphic really used to bother me. It is very easy to misunderstand. Are we looking at three different size displays? Can’t I have a 4K monitor larger than a 8K monitor?

The way I came to understand it was I could have a 25-inch HD monitor, for example, with a decent looking 1920x1080 (Full HD) image. With 4K resolution, I could have a 50-inch monitor and still have the same clear picture without any pixelation. And if I had an 8K monitor, I could have a 100-inch display with the same picture quality of the two smaller displays. The secret is each one of these monitors has approximately 88 PPI (pixels per inch), as you can see on my illustration below.

Or check it out in an excel spread sheet:

Now about those pixels (Picture Elements): The human eye, assuming 20/20 vision and under the right conditions, can discern between two 90 micrometer dots at 1/60th of a degree at a viewing distance of about one foot. After some whiz-bang mathematical formula that only my 18-year-old son can work out, we can calculate that humans can see about 286 pixels per inch—again, at about one foot away. Now put some regular viewing distances between yourself and the monitor, and as Carlton Bale states, “The benefits of 4K and 8K are marginal.”

Renowned broadcast engineer Mark Schubin of www.SchubinCafe.com, puts the pixel story into perspective. “People don't normally detect resolution. No one looks at a 4K or 8K image and says, ‘My! Look at the increased resolution!’ Under the right conditions, one might say, ‘Wow! Look at the sharpness!’”Just as loudness is not the same as sound-pressure level, sharpness is not the same as resolution. “But human vision has a contrast-sensitivity function. We can see stars because they have tremendous contrast against the night sky. As contrast goes down, we lose both higher and lower resolutions (with the higher disappearing faster).”

So how can 4K and possibly 8K resolutions benefit command and control centers? “It’s about quality at different viewing distances. The operations personnel can get a clear and broad view of content, yet the guys in the trenches can walk up close to any display without the image pixelating in their eyes and brains.”

This is awesome if you have mixed content of image and text—and quite necessary if you are looking at high-def surveillance streams. This is also why 4K is critical for multiscreen displays used Intraoperative neuromonitoring (IONM) companies and their doctors. Doctors can sit at home and watch all kinds of vitals on multiple and simultaneous operations as neurosurgeons work on brains and spinal cords. When stats indicate pending trouble, they can immediately notify the surgeon to back off, saving lives and malpractice lawsuits, because it’s all recorded.

In command and control rooms, we can make things interesting by adding video wall processors. We can place content wherever we want within our media canvas. Although command and control is serious business, typically one could get by with less than a dozen source and destination presets that allow the command center supervisor to help personnel do their jobs.

The contrast sensitivity that Mark Schubin addresses is a crucial consideration when designing command and control spaces. If you have a room that needs or has a large amount of ambient light, emissive displays (monitors) are a good choice. If you have a darker facility (bunker) you can capitalize on using reflective technology (projectors). I personally find projection easier on my eyes, though this may be because I’m assaulted all day with monitors in smaller rooms and my own laptop.

Monitors and projectors each come with pros and cons. A power plant control room where vibration could be factor requires very stable projector mounting solutions. Be aware of line-of-site issues as you add technology If you are adding conferencing ability, you may be limited in the placement of hanging mics.

Also consider that when using a monitor-based video wall, install, repair, and firmware upgrades can be a challenge. So can the build-out of sturdy blocking.

If you are working with command and control centers, you should definitely consider upgrading to 4K and 8K displays—the technicians sitting at them will welcome it. Also consider the room’s conditions and needs in choosing display types and whether to have video walls.

Brett Cohen, CCNA, CTS, DMC-E-4K, is an industry veteran, playing lead roles in satellite communications, transatlantic fiber operations, and almost everything in between, including being an inventor and a chauffeur. Currently, he is an AV Project Coordinator at a large corporate facility. He holds Cisco CCNA and CTS certifications. Connect with him via linkedin.com/in/bretthcohen.