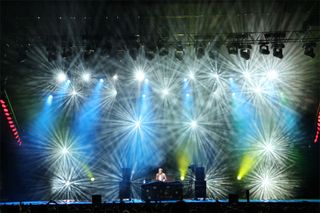 The MAC Viper Profile is a high-output profile luminaire that offers light quality, a diverse feature set and a highly optical system. With its 1000-watt HID source, the Viper consumes less power, making it over 50% more efficient than its 1200-watt rivals. Housed in a slender and agile body, the Viper’s responsiveness and fast pan/tilt speeds have led it to become a favorite among designers.

“I chose to work with the MAC Viper Profiles for many reasons,” said Lighting Designer Gilles Mathieu. “The colors are very nice. The red especially is a real primary red. The speed and range of the zoom is excellent and it only draws five amps of power. Logistically speaking the Vipers were simple to hang and we were also able to place them on the floor when necessary.”

In addition, the main stage design also included 26 MAC 2000 XB Wash lights, 24 MAC Aura LED moving heads, and 8 Atomic 3000 strobe light fixtures. The MAC 2000 Wash lights offered a combination of power and color mixing that Mathieu said would not have been possible with other fixtures. The multi-function and zoom capabilities of the MAC Auras, paired with the robust color and power savings, were an asset to the live show especially during the daylight.