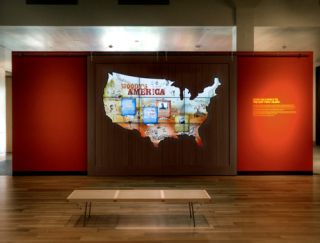 Folk music, a remarkably complete personal and professional archive and modern touch-screen technology combine to tell the story of an American cultural icon at the newly opened Woody Guthrie Center in Tulsa, Oklahoma. The center offers visitors the opportunity to learn about the influential musician’s life and work through a variety of informative exhibits, including approximately 25 interactive experiences.

“Woody’s America” features back-to-back video walls by Planar displays. Visitors can interact with a digital map of the United States to learn more about Woody Guthrie’s life, art and music.

Upon arriving at the center, visitors are greeted by “Woody’s America,” an interactive map detailing Guthrie’s biography, music history and the significant events that took place during his lifetime.

The exhibit features back-to-back video walls by Planar Systems. Facing the entrance to the museum is a Planar 1x6 Clarity Matrix Video Wall powered by six Brightsign Media Players with synchronized media content. The opposite side of the wall features a custom 113-inch 3x3 Clarity Matrix Touch Screen Video Wall powered by an Apple Mac Pro customized by MODE Systems. This video wall is situated behind sliding panels that transform the display into a digital map of the United States. A network of 30 touch points is embedded behind the displays’ glass face, allowing visitors to explore Woody Guthrie’s life and art, as well as events in Oklahoma, U.S. and world history, by touching interactive icons placed at locations where Woody lived, visited, worked or performed.

Educators in Tulsa’s public schools view the center as a vital teaching resource and use it in planning and teaching a variety of courses. Marc Headley, owner of MODE Systems, the systems integrator for the center, said the exhibit was designed to accommodate and engage these student groups.

“We wanted to create an interactive that people would be drawn to and that could be used by visitors of all shapes and sizes,” Headley said. “With the overall size of the touch screens you can have both adults and young visitors on the wall simultaneously and everyone can have fun.”

“In order to reach a generation of digital consumers, we felt that there had to be a strong digital component to encourage exploration,” said Deana McCloud, director of the Woody Guthrie Center. “The best way for students to demonstrate true learning is by taking information and synthesizing it into a new creation. This map provides a hand-on example of how the past can be represented in a digital world.”

Mike Buday, executive producer with GTOO Media, said his team worked hard to make sure the look and feel of the interactive map reflected Woody’s vision of America while also attracting the attention and interest of these tech-savvy audiences.

“We wanted to convey to modern audiences his artistic capabilities while also staying authentic to his day and age, and his simple lifestyle,” Buday said. “We could have easily gotten swept away with new technologies and all sorts of ‘whiz-bang’ ways to showcase him, but that wouldn’t be image-consistent with who he was, or how he conveyed his artistry.”

After scrapping an initial concept for the user interface that, as Buday recalls, “looked like one of those maps you might see on CNN,” the team from GTOO Media created a representation of the United States that more faithfully depicts Guthrie’s lifestyle and experience.

“We wanted it to have a feeling of being sparse and open, to show that his life was all about hitting the road not knowing what was ahead,” Buday said. “It also ties in the lyrics of ‘This Land is Your Land.’ There’s a picture of the redwood forests on the West side of the map, and the New York islands on the East Coast.”

Much of the map content, including the interactive icons, is based on enlarged and digitally enhanced versions of Guthrie’s sketches of the people and places he saw as he traveled across the U.S. Buday said the Clarity Matrix’s high image quality, as measured by its 1920 x 1080 HD resolution, 700-nit brightness, and 3500:1 contrast ratio, ensures that visitors can enjoy his artistry in its original form.

“We had to keep true to what Woody created, right down to the colors he used and the thickness of his sketch lines,” Buday said. “Clarity Matrix allowed us to scale up this content and have it retain its original look on the video wall. That’s really important because people are looking for authenticity.”

In order to provide a consistently enjoyable experience for visitors, the technology powering “Woody’s America” needed to be sturdy, visually appealing and user-friendly. The video wall is equipped with Planar’s Extended Ruggedness and Optics feature, an optically-bonded glass protective surface that allows the displays to perform reliably for up to 10 hours a day, 6 days a week. Headley said this durability, along with the displays’ sleek design, made them a good fit for this exhibit.

“We needed a large touch screen that would give a seamless interaction that could support multiple visitors at the same time,” Headley said. “The Clarity Matrix system has a very thin bezel on each screen that allows touch interactivity over multiple monitors without distraction. The Planar mounting system also ensures that all screens are perfectly flush and level with micro adjustments in all directions.”

Mike Buday, executive producer with GTOO Media, said the user interface of the large map display was designed to accommodate simultaneous use by large groups of visitors.

“We were a little worried that when someone opened up a container, they might take it and make it as large as they wanted, at the expense of somebody next to them exploring,” Buday said. “We decided to limit the size of the container to roughly the size of a piece of paper, and configured the text and images that correspond to that icon to be readable at that size. The moving icons really do encourage people to go touch and explore. You want them to be able to do that while standing next to somebody else without interfering with their experience.”

Headley said the compact design of this exhibit forced his team to be creative when installing the inner workings of the video walls.

“There was no room for power supplies and control and processing equipment at the wall location,” Headley said. “We were able to locate all of these items about 80 feet from the wall in the main AV control room that runs the entire center. We then automated the entire center, so that the exhibit staff can turn all systems on and off with a single button on an iPad at the start & end of each day.”

“This Land is Your Land” features videos of artists including Jackson Browne and Bruce Springsteen performing Woody’s songs, as well as a variety of stock footage and concert performances.

“Our patrons are absolutely stunned by this exhibit,” McCloud said. “There is an incredible amount of content available at this station, and our guests are impressed by the details included. It is truly an experience that reaches patrons' individual interests on a variety of levels.”

The exhibit is even a hit with Guthrie’s own flesh and blood.

“One of the very first people to test out the giant touch screen video wall was Woody Guthrie’s daughter, Nora Guthrie,” Headley said. “To see the look on her face when she saw it in action was priceless.”

“She said she thought Woody would love it,” Buday said, “because it shows a collection of all his stories in a way that was true to what he was doing. It didn’t change his vision. He would have liked to see that lots of people get to see and enjoy it in its original form.”

The entire center is automated and controlled using iPads and everything from volume to lighting for multiple galleries can be controlled from anywhere in the center.

Additional interactive exhibits at the center include:

Dust Bowl – This gallery consists of a large touch screen interactive featuring Guthrie’s “Dust Bowl Ballads.” Visitors can also watch a short film about the Dust Bowl on a 90” monitor. There is also a physical interactive that allows a visitor to push a button and create a mini dust storm in a clear display case.

Theater – A digital theater tells the story of Woody Guthrie, his influence and his legacy as a writer. This theater is run by an automated media player on a projection screen that plays the 11 minute film about every 15 minutes.

Woody & His World -This gallery consists of five more touch screen AV interactives that highlight different time periods of Guthrie’s life. “OKEMAH” features his early family life and musical roots. “PAMPA” showcases his painting and art and his move to California. “LOS ANGELES” features Woody on the radio and his songwriting. “NEW YORK & 1940’s” covers Woody in the Big Apple and World War II. “LATER YEARS” documents his time in Coney Island, family life and his last years in the hospital.

Write a Song With Woody – These touch screens allow visitors to create a song using Woody’s unrecorded lyrics. Users can select lyrics, temps, tone and instruments to create a song and play it back on the station.

Lyric Journal – These interactives feature a collection of lyrics from Woody’s journal that allow visitors to explore Woody’s word choice and style.

This Land is Your Land – These interactives feature videos of artists including Jackson Browne and Bruce Springsteen performing Woody’s songs, as well as a variety of stock footage and concert performances.

Following in Woody’s Footsteps – This touch screen features artists that have credited Woody Guthrie with inspiring or influencing their music or have covered his songs on their own albums or in performances.

Woody Today - The last display is a small video that features interviews and performances that exemplify Woody’s broad reach and his relevance to today’s world. The video includes a variety of content, from performances by The Flaming Lips to interviews about the Occupy Movement with Ry Cooder, Jackson Browne, and Rage Against the Machine’s Tom Morello.

Additional Items - An interactive classroom with a smart board projector and screen offers lesson plans for local schools, as well as songwriting classes and other seminars. There is also a digital marquee in the lobby that displays upcoming events as well as ticket prices and the center’s operating hours.

The center’s juxtaposition of modern technology with traditional rural American culture is a stylistic choice that reflects Guthrie’s art while also demonstrating how history can be shared with future generations in innovative and engaging ways.

“While part of our mission is preserving the past, we also focus on the future and the way Woody's legacy continues to be relevant in our digitally driven society,” McCloud said. “At the bottom to the lyrics of ‘This Land is Your Land’, Woody wrote the words ‘All you can write is what you see.’ The Center in general and this exhibit in particular gives our patrons a great deal to read and see as they view one man's ability to use his creativity to express his world and his views. Our goal is to continue Woody's legacy as we encourage visitors to use their own talents to tell their own stories and hopes for the future.”

“Woody was really one of the first multimedia artists,” Buday said. “He was writing both songs and prose, and he could paint, draw and sketch. Long before the information age that we take for granted today, he was doing all different types of artistic expression.”