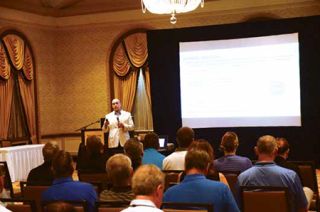 Soon you will be able to work from anywhere, but really, you’ll just be working everywhere, and your kids will be too, according to trends reported from across the education AV market.

Even in K-12, a wireless network is not just for the teacher’s mobile phone anymore. In fact, when I asked AV integrators to list the three essential classroom AV technologies today, consistently, across every segment, they told me that our familiar friends, projectors, and control systems, were now joined by Wi-Fi. And obviously linked to Wi-Fi.

But there’s also something else that’s become a mainstay on that wireless network, and I hope you’re already selling it or selling around it: The Google Chromebox. We’ve been talking about it since last year, but it’s seriously burning up the charts this year, and most likely into the next academic year as well, because the eRate is fully funded, and any school that applied for grants, got them.

“In 2012, the Chromebox was just a rumor, and by the end of this year it will be deployed across 10 million seats in education,” reported Eddie Franklin, vice president of public sector vertical markets for SYNNEX. Franklin and I were chatting at the annual ProAV Summit hosted in conjunction with the BMW Charity Pro-Am golf tournament presented by SYNNEX. The event this year attracted its largest number of AV integrators to date, and as usual, the roster was impressive.

The SYNNEX event really has become the physical manifestation of AV/IT convergence. This year, more dealers were reaping the benefits of the distributor’s connections in the mobility and IT spaces. As it turns out, the whole “It’s easier for AV integrators to learn about IT than vice versa” thing is true, and there’s room for partnership.

TJ Trojan, Tommy Plumer, and Sandi Stambaugh have built an impressive ProAV offering within the company, and VPs from other SYNNEX divisions were in attendance to say, “Hey, seriously, we can help you to do more projects.” Well, they said it more eloquently than that, but the message really is about access: “The great part about what we offer is, you don’t have to be an expert in this; I’ve got the experts,” said Tim Acker, vice president of Mobility and Connected Solutions. “You can come to me with your requirements, and we can do the connectivity solutions for you, we can do the quoting, provisioning, and the design work for them.”

So if your education clients are asking about Chromebox, and you suddenly have to deal with enterprise networks in K-12, hopefully you already have a good IT partner, because the opportunities will be tremendous this year.

As someone who was very nearly unable to work on a recent flight because I was distracted by a toddler who was playing a LEGO video game on some sort of industrial-strength touchscreen version of a Nintendo DS (so they’re NOT all playing with iPads, interesting…), I can tell you something. Novelty is also a thing. Related to that, a friend of mine was telling me that she was on her way to the airport with her brother, but they had to stop at a store to buy a swath of new toys for his 18-month-old son. She laughed and said that at his age, everything gets boring fast. But really, isn’t that the case for everybody these days?

SYNNEX’s Eddie Franklin, VP, public sector, sales, presents during the annual ProAV Summit hosted in conjunction with the BMW Charity Pro-Am golf tournament presented by SYNNEX. The public sector is SYNNEX’s largest vertical. So why not play off the boring and throw in a novelty twist? I was talking with my friend Ken McKibben, co-founder of MediaMerge down in Birmingham, AL, and he told me about some amazing museum applications they’ve been working on. The technology is top-notch, fancy curved short-throw projection setups, holograms, motion-triggered audio yadda yadda, but that’s not the point.

The point is, “It’s a whole lot more fun than reading a plaque, and it’s a lot more fun to design,” McKibben laughed. “The idea is to put some stunts in with the conventional things to catch people by surprise.”

For a project at the Dreams of Freedom Museum in Boston, MA, MediaMerge had to convince the client that the trick was to fool visitors into thinking they were walking in to a typical historical exhibit, but then startle them with some cool video tricks. “I had to work with the owner to convince him that it’s supposed to be boring, you’re supposed to check the box and say this is a lame attraction, and then just when you’re about to turn tail and walk out, we get you, and then we get you again with a second interactive right after that.” He laughed again and said, “The institutional world isn’t too happy about what we do, but if the point is to make people remember the information in the exhibit, if you personalize it and make an impression, they’ll remember it.”

Just a bit of context because I’ve heard from certain members of the industry that Kelleigh Welch’s article about my Stampede Presentation Products’ panel discussion on drones (see page 14 in this issue) prompted many a business inquiry along the lines of “Should we really be getting into drones?”… There’s an Unmanned Systems and Drones Pavilion slated for InfoComm 2015, and let me remind you that we’re not talking about selling remote-controlled aircraft here. They’re actually just a new type of video capturing device, and we’re talking about selling all the AV gear around those low-flying mechanical birds in the sky.

The fact is, people are going to be acquiring video assets, like mad, and they’re going to need to monitor, playback, store, and stream that data. And it’s not just Hollywood and security/life safety we’re talking about, evidently, houses of worship are interested in using drones to get footage from the far-flung corners of mega churches and outdoor events. Even if you’re not selling drones (and be sure to brush up on the FAA’s regulations on the same before you do), you could be helping your customers learn how to use their new toys—I mean, equipment. Watch for my InfoComm preview story online for more business case facts about drones.

Kirsten Nelson is editor-at-large of SCN.