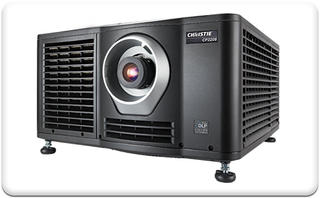 The Christie CP2208 Digital Cinema Projector.
Christie released the Christie CP2208 aimed at theaters whose screen sizes are less than 10.6 meters (35 feet) wide. The CP2208 was shown today at the Beijing International Radio, TV & Film Exhibition (BIRTV) at the China International Exhibition Center in Beijing. Shipments of the units, to be available worldwide, are scheduled to begin in October.While able to support various alternative content sources through dual HDMI ports via DVI connectors, the solution is DCI-compliant, based on Texas Instruments’ 3-chip, 0.69-inch S2K DLP Cinema chipset. The CP2208 will deliver DCI-compliant images at 9,000 lumens within the DCI color space and up to 10,000 lumens when presenting alternative content.