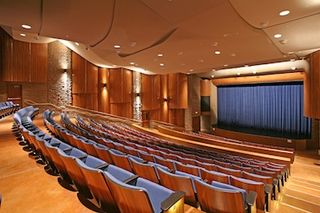 The system employs two Iconyx ICLive DUAL columns, utilizing triple HF coaxial transducers, one on each side of the stage.

As Art Rautenberg of JK Design Group in nearby North Hills, California explains, the Iconyx columns were selected both for their control and their form factor.

"The side walls are all brick, and room is pretty reflective, and we were concerned about the acoustics," said Rautenberg. "The Iconyx enabled us to steer the sound and direct it away from the walls and reflective surfaces and into the seating area."

The Iconyx columns' slim profile was an ideal fit for the space as well, Rautenberg observes. "The architect had left us very little space to mount the loudspeakers," he added. "We basically had a small alcove on either side of the stage that wasn't very wide. So the Iconyx columns are set back a bit into the alcove areas."