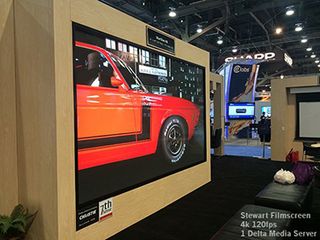 SCN: How did your technology story begin?

Adam Neale: When I was 12 or 13, my parents bought me my first computer, which was a BBC Micro Model B, because I was always, always, always just wanting to do something with computers. So they spent a vast amount of money, as it was at the time, buying me my first computer, and I started programming it. And pretty much from that point onwards I knew that what I wanted to do was engineering, technical, programming, computers. And there was never any doubt in my mind that that was the case. So from there, kind of messed around with that stuff in my youth, as it were, and took all the appropriate courses at school, and through into university. At university I did electronic engineering, and within that there was a system-level bias, so a lot of software, and I spent a bit more time on the software side of the engineering course. But my qualification, my degree, is in electronic engineering.

InfoComm 2014 was the largest and most prestigious showing of 7thSense products ever, with 11 booths in total showing 7thSense Delta Media Server solutions.

During that whole process I decided I wanted to do a “year out”, which is an internship, and I was fortunate enough to be given an opportunity to work for a company called SEOS, which has now been bought out by Rockwell Collins, but was independent at the time. SEOS was a display system provider for simulation, and through the whole process became the world’s leading display system provider for simulation. We used to work on a lot of projects within dome, fast military jet stuff, and also on the civil aviation side of things—a lot of work with that, but essentially from the first day I was there, I was thrown in at the deep end. Which I liked a lot, and I really enjoyed my time there. I did a lot of cool projects with them, even as an intern, went back to university, finished my degree, and was offered a job back at SEOS after I qualified.

I worked in various capacities at SEOS. We formed a department there called software and systems, and that was where I started working initially with my business partner, Ian Macpherson. He was my boss—he was one of the first engineers at SEOS. It was a great company, we used to work very, very hard, but we used to get very rewarding projects.

So basically learned my trade there. It was a great place to work, had a chance to learn a lot of really cool stuff. And I traveled an awful lot with them as well, working on installations around the world, with a focus on software and systems. So software and how it applies into curved screen, multichannel projection, warping, blending, which was then really the driving force and the introduction into what we’re doing now.SCN: How did you make the leap into doing your own thing?

AN: We founded 7thSense 10 years ago. I was at SEOS for 10 years prior to that. It was acquired by Rockwell after we left, but it was privately owned the whole time we were there.

Neale back in 2005, installing a 360 system with a very early Delta Media Server in Thailand on one of the first big projects that 7thSense won.

Ian and I got to a point where we wanted to do something else. SEOS was a great company… and pretty much over a beer at Christmas, we decided let’s go do something. And the initial concept that we had, we knew we wanted it to be media serving, playback engines. We were involved in a lot of high-end entertainment projects at SEOS towards the end, with a sister company to SEOS called TriMension.

We got to the point where some of the projects we were doing were planetariums, and we did the American Museum of Natural History, the Hayden Planetarium, when it added its first digital projection system. So that’s actually one of our systems in there, and the original system that was put in there was with SEOS.

So we’d worked on a few of those kinds of projects, and at the time it was using kind of ‘bespoke hardware solutions’ for doing playback. So at the point that Ian and I decided to do something, we thought there was an opportunity there for doing a PC-based solution for uncompressed media playback into planetarium environments.SCN: You were the lead engineer on the development of the first hardware solution for warping and blending, the Mercator, while at SEOS. When you and Ian MacPherson decided to launch your own enterprise, you made sure you had a clean break between working at SEOS and launching 7thSense in 2004. What came next?

AN: We started out with nothing, and I kid you not, nothing. No product, no business, and no money. We spent the first year obviously very, very busy writing code. We got some contract work from SEOS and the simulation industry to pay the rent.

It took us about a year to have the first, very early iteration of what we now have. But it was the same thing—it was the Delta Media Server product—that we started writing from day one, and that we’re now selling into the space.

AN: It has its challenges, but the flexibility we bring to it is key. And the product development is really driven by projects and customers.

SCN: You were international from the start, with your first major project being the addition of digital projection to the IMAX theater in Copenhagen. Now 7thSense has in-house and contract personnel all over the world. What prompted you to open an office in the U.S. based in Detroit, MI?
AN: Our biggest single market at the moment is definitely theme parks, and the biggest single geographical market for us is the U.S. The lead engineer on the Ferrari World project in Abu Dhabi was Ken Showler, who is based in Michigan. As business started growing in the U.S., we wanted more representation there, so we hired Ken to launch 7thSense Inc.SCN: Won any major awards from the Queen of England lately?
AN: In April this year we were extremely proud to be awarded the Queens Award for Enterprise in Innovation, generally accepted as the highest accolade for U.K. businesses. We’re going to meet the Queen next month.