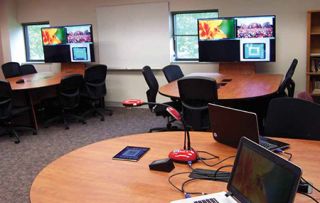 In an age of hybrid tech teams and converging AV and IT, who should manage huddle spaces?

Huddle spaces can offer the best of both worlds—useful tech and scalability—but who is in charge of maintaining them? AV teams, IT teams, or both?

Definitely “both,” according to Drew Taylor, director of Sales and Applications, at Lightware USA , because “integration between AV and IT are coming together.”

A TEKVOX UltraHD Quadview Classroom has been delivered, installed, and is fully operational at Lone Star College in Houston, Texas. The college’s Tomball Campus is the inaugural customer for the huddle-style collaborative classroom solution, and plans call for more UltraHD Quadview Classrooms. But ask Rob Houston, product manager, Unified Communications, Biamp Systems, who gets the huddle space management duty, and his answer depends on if the rooms are currently tech-enabled (then it could be IT or AV managing them) or are simply meeting rooms with a phone and display (could be facility management). “In terms of who would drive decisions around design and implementation of technology solutions for [huddle] rooms, it also will vary among IT (with the idea that these rooms extend the end-users’ desktops) or among AV (adding huddle rooms to their work supporting board rooms, conference rooms, etc.),” Houston explained.

The size, user profiles, and preference of the company or university will drive the issue, Houston contends, so it is important that “AV works in partnership with an organization’s IT department,” taking the best advantage of everyone’s core competencies and expertise.

This contrasts with observation of Robert Detwiler at InFocus. As he opined: “We’ve found that most often the IT team manages huddle room tech, or even the team who uses the space most often.” Because IT and AV can’t or shouldn’t always be involved, he said that, first and foremost, the equipment needs to be so easy to setup and use, that interns, new users, accounting, HR, and or marketing employees should all be able to use it. Simplicity and user training will help to decrease the number of problem tickets for every help desk.

Barco’s David Fitzgerald, vice president of Channel Sales, sees both AV and IT teams managing huddle rooms separately as well as together. “It all depends on the structure of the individual company and available resources,” he said. Barco has also seen situations when only the end-users are managing the huddle room.

Indeed, while it depends on the company, sometimes end-users are managing the rooms themselves with little involvement from either IT or AV, observes Maria Porco, VP of Business Development for X2O Media, a Barco company. “IT/AV would be smart to get ahead of users and implement reliable, lowsupport solutions,” she said.

Ultimately, the use of a huddle room is meant for frequent, spontaneous meetings, so whoever is in charge of the design and installation, it’s critical to equip them and prepare them for as little intervention as possible.

If the AV team is still managing huddle rooms, in many places they are now reporting to the IT department. That one conclusion from Crestron’s Dan Jackson, Manager, Product Line, M&D Engineering. Jackson says that IT expects standardized systems in every room, so they’re all setup and operate exactly the same way every time. They also expect to have visibility to every endpoint on the network. “Traditional AV systems don’t work that way, so IT is frustrated because as more technology goes into more rooms, they continue to lose visibility,” Jackson explained. “Even though these rooms are small and may not have sophisticated systems install, there are many of them and it’s important that they are on the managed network.”

For Perry Goldstein, the network is the “X-factor” when it comes to managing huddle spaces. Goldstein, the director of Business and Product Development, Unified Communications, for Marshall Electronics, says that tech teams across the commercial sector are becoming one, as “IT and AV are merging.” But, in the case that they are still separate divisions, “it seems the IT team is getting the huddle room assignment, since it involves the network.”

Epson’s Christopher Bodmer concurred, and asserted that while the AV teams are the primary owners of any audio/video solutions, IT teams play an important role when it comes to collaboration technology. “Most solutions today are connected to the network to allow both in-room and remote collaboration, hence the need for the IT team to get involved.” Overall, Goldstein emphasises that teams must work together to make a huddle space successful.

Because huddles are relatively easy to manage once their operation is understood, Jack Gershfeld of Altinex states that “both AV and IT” divisions should be able to maintain the environment and keep users happy. If the collaboration system is not connected to the network, it can operate in standalone mode. Some systems with IP connectivity can be monitored remotely and provide information on the system’s usage. Gershfeld added: “The most important part of the management of the huddle room is to have a clear diagram of all of the connections and all of the pieces in the system, which can be easily accomplished with a system design tool like AVSnap (www.avsnap.com). Once the system is properly documented, maintenance becomes a non-event.”

One of the most common scenarios in a large corporation of university is that both the AV and IT teams are managing huddle rooms. “Some organizations have blurred the distinction between their AV and IT support teams, while others have chosen to keep them separate,” said Mark Wilson of AMX. “But the trend is for AV and IT teams to converge, and for AV products to be managed simply as another set of assets on the IT network.”

Kramer’s Michael DiBella sees less and less pureplay AV teams, as they are “being absorbed into the IT departments.” Dedicated AV professionals are, of course, still recommending, testing, and implementing technology for the huddle space, but DiBella identified the fact that corporate IT groups are doing the same, or at the very least, managing AV. “For years our industry has talked about the convergence of AV over IT and that day is here,” he said. “Two of our solutions immediately come to mind; our VIA Collage runs a Windows platform and our K-Touch control is cloud-based. IT would undoubtedly need to manage both these solutions.” More products are dependent on IT-based technology for core functionality, so the shift from AV to IT management is more than just a trend for the huddles of 2015/2016.

Tim Root says that many IT teams develop their own internal solutions and leverage myriad vendors. “These tend to be larger organizations that are looking to boost productivity in distributed teams.” These groups evaluate new technology in an effort to understand the limitations, so they know what needs to be addressed in the future.

When it comes to leveraging huddles for monitoring, Jim Reinhart, CEO of Tekvox, stressed that a system must support multiple active connections sharing content without “passing the bit hose”. He pointed to video processing, such as scaling or multi-video compositing, as part of a solution. “The system controller provides energy management, as well as facilities for remote management and maintenance by IT teams.” He added that, despite the trends, “AV electronics are still the domain of the AV staff, for the most part.”

Why Are Huddle Spaces Trending?

When talking about time and space management, which is crucial, there are two very important reasons for having a huddle room. Firstly, people don’t need to schedule meetings beforehand and, given that meetings are often seen as bad use of time, this ensures a space when needed and encourages quick and simple discussions. Secondly, they are much easier to set up and to install given their simple nature. Having videoconferencing in these small rooms is comfortable and efficient as it allows users simultaneously cooperate and share content with one another to execute collaborative work; all they need is a display installed, HDMI or VGA ports in the room, a camera for videoconferencing and availability to go wireless with their smart interfaces. With HDMI/DVI/VGA ports, it’s easy to connect laptops to displays and easily let them share content.
—Information courtesy of Lightware (Lightware.com)

A Duquesne University classroom after being reconfigured as a collaborative learning environment. Barco, Panasonic, and InfoFocus products were used to transform the spaces. At Duquesne University in Pittsburgh, PA, two classrooms were designated as FlexTech (Flexible/Technology) spaces. Designed as collaborative teaching and learning spaces, furnished with tables and chairs configured to allow students to work in groups. While faculty will have the option to conduct an instructor-led session, there is no “front-of-the-room,” as these spaces are designed for problem-based, workshop experiences. Barco’s ClickShare is part of the wireless real-time collaborative design.

The other FlexTech space, in Rockwell Hall, is furnished with eight sets of moveable tables and chairs along with six wall-mounted, flat-screen monitors and two mobile monitors. The room also contains an InFocus Mondo pad for instructor use. The Mondo pad images may also be viewed on all group monitors. Information courtesy of Duquesne University (http://www.duq.edu/).