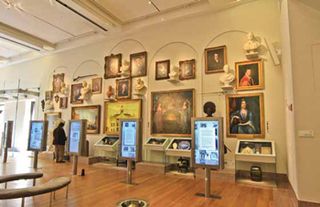 If I were writing this article for just any old publication I might get by with talking about thin bezels and LED illumination and leave it there. But no, our hard working editor expects much more, and that she and you will get.

As part of the $70 million renovation to the New-York Historical Society Museum & Library, Electrosonic installed five rotating display housings which contain portrait oriented 46-inch Samsung touchscreens in The New York Rising exhibit. When a visitor rotates one of the touchscreen cases, panning across a portion of the exhibit, the graphical images on the touchscreen pan with it, thereby highlighting the artifacts on the wall directly in line with the display.
The first stop on this little journey will be with brands. Yes, brands. We are all familiar with Samsung, LG, NEC, Sharp, Sony, and on the plasma side, Panasonic. These are certainly a collective of 800-pound gorillas in the flat panel market, but to stop there would be disservice to others who also play on this playground and offer some very interesting products in the process.

I will start with Mitsubishi and its lineup of LCD flat panels. We all know them from outstanding projectors and some of the best home theater rear screen displays available on the consumer side, but they are not the first to come to mind in the LCD flat panel wars. Looking at its product lineup, this may be an oversight on the part of many. Mitsubishi has a full and robust lineup, from its 32-inch at 1366x768, and then increasing resolution to 1920 x1080 for its 42-, 46-, 55-, and 65-inch displays. It has all the bells and whistles in the lineup, and for details you can go to the website… but not so fast. How about a very special display at 56 inches and 3840x2160 resolution? Got you!

According to Mitsubishi, “This LCD display offers QFHD (quadruple full high-definition) resolution with an unsurpassed 3840 x 2160 pixels, which means that more than eight megapixels are displayed on one 56-inch screen. While some manufacturers have cut 4K from their product lines, Mitsubishi is committed to this necessary resolution. There are many applications, particularly in industrial, health and physical sciences, which need this type of super-high resolution. These include applications in science, engineering, financial services, mapping, satellite imagery, utilities, government, armed forces, and law enforcement. The 56P-QF65LCU LCD monitor uses a Super MVA LCD featuring 3840 x 2160 pixels with a 50,000 hour backlight lifetime, and has two brightness modes for installation flexibility: power-saving normal (480 watts) and bright (540 watts). Sending information to this display requires a computer or display wall processor capable of four 1080p output channels.”

Before the naysayers point out that we do not need this high resolution ‘stuff’, just think about the new Retina display on the iPad and the increased pixel densities coming out in cell phone, tablets, etc. I might add that further proof of this is the increase in resolution in digital cinema to 4K and the increased frame rates to provide more information on screen. This is a trend that cannot be ignored. The folks at Mitsubishi know this and are putting their product development money where their mouth is.

(Right) NEC’s V651-TOUCH commercial-grade large-screen display offers digital signage users touchscreen capabilities with a full-HD, 65-inch display at a cost-conscious price. This model is integrated with 4-camera optical-imaging technology that allows for up to six simultaneous touches. (Left) Mitsubishi’s 56P-QF65LCU LCD monitor uses a Super MVA LCD featuring 3840 x 2160 pixels with a 50,000-hour back-light lifetime, and has two brightness modes for installation flexibility.Next on my hit parade is a little known company by the name of DynaScan. Its claim to fame are the circular LED displays found in airports and convention centers around the world, but just as other lesser known suppliers, it did not rest on its well-established laurels in that niche. In fact, DynaScan’s parent company is a leading supplier of LED testing equipment out of the far-east and it has discovered a way to increase the brightness of an LCD flat panel without the need for super cooling, air conditioning, or the like. Just remember before you go further, that a typical 40-inch LCD had 450 nits of brightness and the new brighter LCD displays from Samsung and NEC are 700 nits. You will soon see a couple of companies offering 1200 and even 1500 nit products, but what if you need more?

DynaScan has a 46-inch display with a standard thickness bezel at 3K nits, but let’s pass on that to drool over its 47-inch narrow bezel displays at 1,500 and 2,500 nits. How about a pair of 55-inch narrow bezel models at 2,500 and 5,000 nits, and last but not least, a huge 65-inch narrow bezel model at 2,500 nits? At the Digital Signage Expo this year the manufacturer had a good-sized video wall with 5K nit panels, and it was brighter than most LED outdoor displays. What is miraculous to me being a picture quality geek, DynaScan’s contrast levels are excellent and the depth of color is outstanding.

So where does this kind of brightness fit? The answer is quite simple: ambient light washes out displays, and any time there is high ambient light that cannot be controlled, a high light output display is needed, be it a projector or flat panel display. All we can say to DynaScan is: well done.

Another company that is certainly not a household name in commercial AV or digital signage is Apollo Display Technologies. It has a number of products, but one stands out in my mind—believe it or not, it is a 3D flat screen. This display is autostereoscopic, or in basic terms, you do not need glasses to view it. I was at a trade show down in New Orleans, LA not too long ago and stopped in my tracks to view what they had come up with. I spoke to one of Apollo’s field engineers, and asked him about the technology. He said that they were working in cooperation with the Swiss company 3D Impact Media, and have developed innovative 3D monitors for digital signage applications.

The use of shutter glasses is not necessary. Apollo’s autostereoscopic 3D monitors are equipped with an optical measuring system, which puts a barrier filter on the TFT display. This filter hides single pixels, which leads to the fact that our eyes perceive different images. This in turn triggers the 3D effect in our brain. T he displays use the 8-view technology, which guarantees smooth image transitions even when the viewer is moving. The key point here is that with most autostereoscopic displays you must stay in one very limited ‘sweet spot’, and if you move off center, the 3D effect is minimized or goes away all together. The Apollo display had no such limitations. My conclusion is that maybe there is a spot for autostereoscopic 3D after all.

The last brand that is not as well known as it should be is Planar. I say “as it should be” because it makes some of the most rugged LCD flat panel displays and other products as well, and build them from the ground up as commercial displays. This means things like metal housings, handholds (hooray!), high MTBF power supplies, etc. It has a whole range of products in 42-, 46-, 55-, and 65-inch sizes, but one of my favorite products is the Planar Clarity Matrix HX600. It sounds pretty cool, and it is. How about a 60-inch video wall flat panel at WXGA and 1900 nits! With the video wall universe in the process of growing before our very eyes, Planar see the big picture (pun intended) and custom builds displays to stand the test of time.

I have spent a good deal of time talking about brands that do not immediately come to mind in the realm of flat panels displays, but the big guys at Samsung, NEC, LG, Sharp, Sony, and Panasonic are not asleep at the wheel. They are all introducing models with thinner and thinner bezels, and migrating to LED illumination. The next big thing in this realm is to go from edge-lit LED to full backlit versions across the entire back of the display. Ultimately this renders better contrast and better color gamut and calibration capability.

The Samsung Sur40, a partnership between Samsung and Microsoft, is a 40-inch flat panel table that can also be wall mounted and offers 50 points of touch. It has a built in computer and is based on Widnows 7.Speaking of thin bezels, we have been privy to one manufacturer who will be introducing what will look like a zero-bezel LCD flat panel. It will still have a very (very) tiny bezel, but by using a special glass configuration at the extreme edge you will not see the bezel at all. Smoke and mirrors perhaps, but it works. We will reveal whom shortly, so stay tuned.

Samsung, NEC, and Panasonic have specialized in slide-in modules for some of their flat panel displays with computer and media player options. This will continue, but the computers will become more robust, and come with more internal memory. One company is designing modules that will be upgradeable as new processors and memory upgrades are needed. Necessity is truly the mother of invention in this fast moving area.

I would be remiss if I did not mention a unique flat panel display—the Samsung Sur40. This is a partnership between Samsung and Microsoft. Technically it’s the second generation of the product, but really only the first one that is fully productized in this writer’s opinion. It is a 40-inch flat panel table that can also be mounted on the wall (with the legs removed of course). It offers 50 points of touch. Doing the math this is five people with all fingers on the panels and it tracks each and every one. It has an infrared layer beneath it that senses what is placed on it and replicates the image on the table. It has a built in computer and is based on Widnows7 imbedded.

The concept is all built around what is called a NUI , or natural user interface, instead of the GUI , or graphical user interface, like a computer mouse. The basis of all this is a natural interactivity that is based on normal human motions and interaction. It takes less learning time and prevents many nasty physical problems associated with things like the use of mice and unnatural physical movements. At recent shows I have attended, people stand in line to see the Sur40 and play with it. Get ready for when the prices come down because you will have to have one! I do wonder where my demo sample is.

Alan C. Brawn, CTS, ISF, ISF-C, DSCE (Alan@BrawnConsulting.com) is a principal of Brawn Consulting, an audiovisual consulting, educational development, and market intelligence firm. Brawn is an AV industry veteran with experience spanning over two decades, including years managing a commercial AV systems integration company after which he became one of the founding members of Hughes- JVC. Brawn is an Imaging Science Foundation Fellow and the managing director of ISF Commercial.