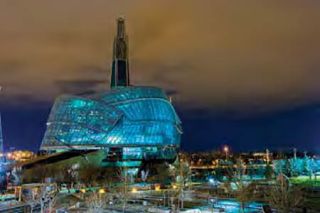 With virtually no barriers between galleries or the ramps spiraling up through the Canadian Museum for Human Rights’ complex steel girder structure to the 23-story Tower of Hope, sound could very easily have leaked between exhibits without strict management. The Canadian Museum for Human Rights (CMHR), the first museum solely dedicated to the history and future preservation of human rights, completed and opened the last of its exhibit galleries in November 2014. Built at a cost of $351 million at the Forks, a riverside park in the center of Winnipeg, Manitoba, the steel and glass museum was designed by American architect Antoine Predock.

Steve Haas, president and principal consultant with SH Acoustics in Milford, Connecticut, was called in to provide consistency between the designers, fabricators, systems integrators, and media producers, and to manage all of the audio delivery and acoustics. Electrosonics, headquartered in Burbank, CA, provided systems integration.

The museum’s architecture was especially challenging, said Haas. “We’re not talking about a rectilinear box here; there’s not a single right angle. It’s got very hard reflective surfaces, many of them concrete, at angles that can ricochet sound in ways that you would just not believe.”

Further, with virtually no barriers between galleries or the ramps spiraling up through the complex steel girder structure to the 23-story Tower of Hope, sound could very easily have leaked between exhibits without strict management. “Our interaction with the nine or 10 content producers on this particular project was quite extensive,” said Haas. “We had to basically play sound cop to make sure that what one producer was doing wasn’t going to completely obliterate the experience of producers two and three, who are right next to them, or surrounding them, or vice versa.”

With very few exceptions, every exhibit in the museum has sound associated with it, which meant that coverage had to be strategically focused and dynamic range carefully controlled. “If we just threw two speakers in the front and blasted away that sound would just keep going,” Haas said. SH Acoustics developed what he calls “enhanced stereo,” innovative delivery methods that immerse viewers in the immediate vicinity without encroaching on adjoining exhibits.

“We had to create an immersive field of sound with quite a few delay speakers that either are suspended overhead or integrated into benches in unique ways, so the quality and processing of each of these zones was important,” he elaborated. “It’s really the small but great quality sounding form factor boxes that work well for us in that regard.”

For example, “We went to Innovox, [which] is very good at morphing shapes of small speakers in ways that don’t necessarily come off the shelf, and yet met our needs for audio quality and containment, but also met the exhibit designer’s needs to be able to conceal these in unique structures.”

On the initial 300-foot ramp up, SH Acoustics developed a transitional soundscape using what Haas calls “activated sound”— transducers hidden behind the Venetian plaster wall. “It’s a very brittle material; not the easiest to make sound good,” he said. “But through a lot of effort we were able to get the right configuration, and the right processing, to make it happen.”

In some theaters, James Loudspeaker Power Pipe subwoofers were installed in the benches. “We could time-align those with the main speakers and keep the bass very local.”

Only the Brown system utilizes local DSP, to adjust focal time delays between the individual speaker elements. Otherwise, sound delivery is controlled by a Biamp AudiaFLEX DSP system. “We always try to centralize processing so that we can do all of the finagling—routing, mixing, EQ, delay, whatever we need—to manipulate the sound, using certain tricks of the trade to make it feel more immersive but not loud,” Haas said.