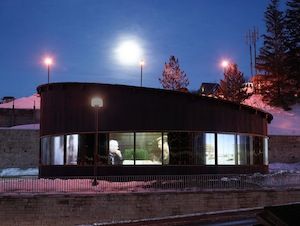 Renowned artist Doug Aitken marked the U.S. premiere of his installation “The Source (evolving)” at New Frontier at the Sundance Film Festival in Park City, Utah with AV support from WorldStage, which provided design consultation, equipment, and programming.

"The Source (evolving)" featured six-channel video projections arrayed along the inner circumference of the cylindrical pavilion's interior and were visible from the outside.

New Frontier at Sundance champions films that expand, experiment with, and explode traditional storytelling. “The Source (evolving)” is a kaleidoscope of fast-paced, candid conversations with pioneers from different artistic disciplines from around the world. Aitken asks these shapers of modern culture where does the creative idea start and what is the journey to the finished creation?

“The Source (evolving)” was housed in the Pavilion, a new 2,000-square-foot circular structure adjacent to Main Street created in collaboration with U.K. architect David Adjaye. Six-channel video projections were arrayed along the inner circumference of the cylindrical structure’s interior and were visible from the outside at night when curtains were withdrawn to allow the screens to be viewed through The Pavilion’s large windows.

Aitken has said that his immersive documentary “examines the entire process of creation, not just the finished result, and speaking directly with the creators whose work has the ability to steer culture in a significant way, ‘The Source (evolving)’ takes viewers on a fast-moving road trip through the modern landscape of creativity.”

WorldStage previously worked with Aitken on “Sleepwalkers,” a multi-screen cinematic experience projected on seven facades of The Museum of Modern Art in New York City; a special single-channel version of that installation was presented at New Frontier at Sundance in 2008.

“We not only designed and specified the media components but also the wall construction to minimize crosstalk between the six separate theaters, which is typically an issue for installations like this,” said WorldStage project manager Randy Briggs.

“It was a pleasure to work with Doug Aitken again and to introduce his latest installation in a completely new custom built venue at Sundance,” Briggs continued. “Doug always creates unique experiences, and we’re honored to have collaborated with him on this ground-breaking six-channel projection. He is one of the most interesting voices in multimedia art today”

Aitken also developed an accompanying interactive website for “The Source (evolving),” which connected audiences not attending Sundance with the work and which will serve as a living archive that he will continue to populate with interviews.