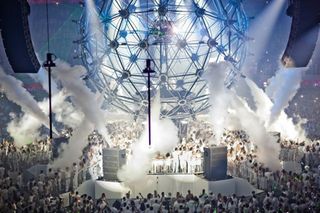 Martin Professional’s new MAC III AirFX mid-air effects and wash luminaire debuted at the premier of a new Sensation electronic dance music event at Amsterdam Arena this past summer and is now shipping to rental houses across the globe.

“I needed a spot and wash fixture with a lot of output for impact, something that could do nice mid-air looks, and I found it in the AirFX,” Sander said. “The zoom is great; it’s fast and can zoom out wide.”

The MAC III AirFX can be used as a beam, mid-air effect or wash luminaire and its beam gobo projections can adjust along the entire 10-47° zoom range. On Sensation, they worked together with 88 MAC III Profiles as the show's workhorse lighting fixtures, all supplied by Rentall through Martin’s Dutch representative, Fairlight.

Sensation is one of the world’s most popular electronic dance music events with nearly 2 million people participating in events held throughout the world. Every year a new show tours the globe after its Dutch premiere. All attendees are required to wear white and the Amsterdam Arena was decorated to match.

The Source of Light design featured a large sphere centerpiece fitted with various lighting effects including Martin Atomic strobes and MAC Auras with Jem smoke machines used for atmospheric effect. Sanders had the MAC III AirFX fixtures placed at a considerable distance from the sphere, all the way around the arena at the openings to the second level seating.

“There was a lot of light coming from the center sphere and the AirFX’s output was really good to cut through that and provide effect outside of it,” he said of the fixture‘s nearly 60,000 lumens of power.

The MAC III AirFX was used as an extremely bright profile, creating mid-air effects and illuminating the floor and crowd of 50,000, all dressed in white.

“The audience was looking at the sphere and the AirFX fixtures were at a height so that they could look right into the effect, into the gobo beam,” Sander said. “They were also at an important position for the camera and the DVD recording. I used them throughout the show.”

“All in all it was successful, both from a technical standpoint and a performance point of view,” said Martin product manager Peter Skytte. “Sander really used the fixtures effectively, especially its capability to zoom wide which looked awesome on the show. It was the ideal space to test the AirFX and was also used for a sneak preview the night before, which also went well.”