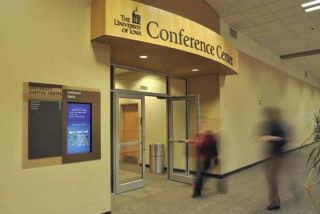 When it Comes to Digital Signage, the Potential is Limitless

The University of Iowa utilizes Visix’s AxisTV digital signage software throughout their campus to inform and engage students, staff, and visitors.

Not long ago, digital signage was a novelty: a sexy way of displaying advertising. These days, this technology has expanded out of the retail, hospitality, and entertainment markets…and into just about everywhere else.

“A few years ago, people were still asking: What is digital signage?” said John Novak, director of digital signage at digital connectivity provider Gefen in Chatsworth, CA. “They are now at the point of realizing what it is and what it can accomplish.” Now the question is: How can we best use it?

Today, many digital signage systems are employed to display information to facilities’ visitors, or even as a means of internal communication. An increased emphasis on security has driven educational institutions and healthcare organizations to integrate digital signage into their emergency notification and evacuation systems. Not only does this technology offer users an efficient way of keeping the information they wish to distribute current; it also speaks to a generation of people who grew up, for the most part, reading screens. “Younger people are used to media—they are used to motion, and they are used to graphics,” said Chris Pelzar, CEO and managing partner at Activate The Space, an audiovisual display designer, manufacturer, and integrator based in Canton, CT. “We have found that putting digital signage in any location is an extremely effective way of communicating.”

For Kevin Goldsmith, director of digital media operations at Ping HD, a digital signage solutions provider based in Denver, CO, one of the main factors contributing to the adoption of digital signage technology is that it’s become financially accessible. “The screens have become more cost-effective, the media players have become more cost-effective and reliable,” he said, “and there is a greater breadth of software solutions out there as well that enable users to get their content to the screens in multiple locations.” In a word— or four: costs have come down.

While Pelzar notes that digital signage is becoming ubiquitous, how the technology is applied can differ greatly in both use and scope. “The use of it varies from the large LE D boards that we do in Times Square to a single-location office, where they may have information on their company for visitors that are waiting,” he said. But while digital signage is widely used and offers considerable opportunities to systems integrators, it demands those selling it to present a clear return on investment. “I would caution that the cost of entry is important, so the value proposition to the person that’s purchasing it has to be established. Certainly, putting up a digital sign can be significantly more expensive than putting up a printed sign.”

One challenge that both integrators and end users are dealing with is a lack of standardization in digital signage technologies. “Digital signage, in that sense, is kind of fragmented,” said Jason Fitzgerald, product manager at Gefen. “The players who are already in digital signage have had that liberty to create their own standards—especially the bigger players.” When someone chooses a solution, that’s the solution they have to stick to, he warned. “You can try to move to another one, but it could be vastly different in terms of how it needs to be implemented.”

As the marketplace continues to adopt digital signage technology, and consumers manage an increasing portion of their lives on their smartphones, the question becomes: How will the two technologies collide? “There are people that are smarter than me that argue consistently that mobile is or is not a part of digital signage,” Pelzar said, noting that advertisers are focused on pushing content out to mobile phones, either via social networking or other venues. “I believe that the future of digital signage will actually have some level of integration between all of these things. At some point, it will be a marriage of these things so that it becomes a multi-dimensional presentation.”

The NMP570w media player can connect to content found on the web and incorporate it into any digital signage display, showing content found on cloud devices. It is HTML5- and SMIL -compatible and has built-in screen templates for both portrait and landscape mode.

A combination hardware/hosted solution, MediaFlyer EX PRE SS includes a compact player that installs at the screen and a subscription to the MediaFlyer website where content is uploaded and managed. Through the system’s drag-and-drop interface, users can set up a layout, upload and place content in multiple zones, and schedule presentations to play at specific times. The layout editing interface enables a user to divide the screen into two or more areas for showing different content and set up a ticker or text crawl at the bottom.

LG ’s NC1000 is an external, solid-state media player that attaches to the back of the display, and once connected, can transmit content such as way finding, dynamic advertising, information boards, and broadcast video in full HD.

The HMP130 player has been designed for use with SpinetiX Fusion content management software. Fusion runs within the HMP130 and offers 30 percent more computational power.

The SMP-WEBDUO digital signage player reduces its size by one quarter and sheds half of the weight, compared to its predecessor. It adds the video-in function, and can control two screens simultaneously.

BrightSign’s HD210w and HD1010w include the hardware, WiFi support, and software for creating, updating, and managing displays. Both controllers deliver looping playback of full HD video at 1080p resolutions, images, and audio. The HD1010w adds support for buttons, touch screens, LE Ds, motion sensors, and any GPIO or USB device.

The Scala 5, Release 6 update across the platform of designer, content manager, and player includes new visual effects for text and other elements, more video and streaming options, and HD quality.