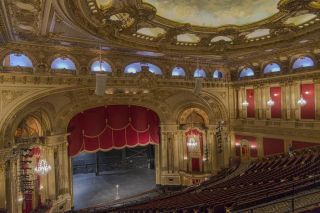 Boston Opera House has chosen RoomMatch arrays from Bose Professional Systems to provide clear, even audio coverage to the expansive balcony of the performance center. With 2645 total seats and 1303 in the balcony alone, the theater’s owners wanted to ensure that touring productions would have the ability to deliver vocal clarity in the wide mezzanine and balcony.

Opened in 1928 as B.F. Keith Memorial Theater, the Boston Opera House has hosted scores of classic productions over its 86-year history and saw a massive $50 million renovation in 2004. These days, the majority of the space’s annual 200-plus-show calendar is filled by the Boston Ballet and touring musical theater productions hosted by Broadway in Boston (recent and upcoming shows include Book of Mormon, Phantom of the Opera, Lion King, Motown the Musical, Newsies, and Kinky Boots).

Boston Opera House production manager Mike Marchetti was leaning toward a system from a different manufacturer; however, he was persuaded by colleagues to hear a demo of the Bose RoomMatch system. After the demo and an A/B shootout on site with his original choice, Mike became convinced that RoomMatch progressive directivity arrays were what he needed.

The system, installed under the supervision of Adtech Sales Engineer Charles Crane, includes two RoomMatch arrays, with each array consisting of one RM5505, two RM7010s, one RM12010 and one RM12020 module, along with eight RMU208 small-format foreground/fill loudspeakers for under-balcony and “shadow-killer” fill. Power is handled by four Bose PowerMatch PM8500N 8-channel amplifiers, and processing is handled by a Bose ControlSpace ESP-00 Engineered Sound Processor. Other components included a full complement of cables, speaker and line-level patch panels, XLR jumpers etc., from Whirlwind.

Marchetti stated, “Vocal clarity is very important for the type of performances held here, and it was difficult to achieve for some touring systems, especially in the balcony areas. And most notably for productions that have a lot of speech or sung text in dialect – like Dublin accents in Once, or Ugandan accents in Book of Mormon, or rural British in Billy Elliott and such. After I had a demo of a RoomMatch system, I was convinced that it provided the right solution for clear balcony coverage, and it fit well within our budget. When we did the actual A/B shootout at our venue, I invited several of my colleagues whose opinions I trust to be involved in the listening evaluations – these included Steve Colby, Audio Engineer, Boston Pops Orchestra; Bradley S. Berger, Director of Production, Berklee College of Music; Rick Brenner, Sound Designer, Boston Ballet; James Jensen, Exec. Director, Boston Opera House; and Rich Jaffe, President of Broadway in Boston, to name a few. I must admit, I was skeptical at first, but after my mind was made up, I started telling others throughout the industry how impressive the RoomMatch system is. And since the installation, my fondness for the system has grown stronger.”

“I was very pleased that the system specified was a Bose RoomMatch system, as I have recently employed RoomMatch and PowerMatch components in several installations in our area,” stated Charles Crane. “For example, at the University of Rhode Island’s Edwards Auditorium, RoomMatch solved a problem, as their existing system was not covering every seat. In the Boston Opera House application, RoomMatch not only increased coverage but it bolstered speech intelligibility by a significant margin.”

Crane also noted that a unique aspect of the project was matching the color of the theater’s golden/beige décor and painting the Bose modules to match. “Beyond that,” he stated, “things went very smoothly, and the crew at Boston Opera House helped with much of the installation. We had strict instructions to keep the architecture intact due to the historical nature of the building, but there were two holes that had been drilled for a special presentation of Phantom of the Opera years ago. We lucked out, because they were in the exact right spots for our purposes to hang the system. Once the system was up, it required minimal tuning or tweaking to dial in the audio perfectly.”

Marchetti noted the unique challenges of providing sound reinforcement for a variety of genres in a large theater: “If a popular music artist is touring and the sound isn’t getting to the right spots in the venue, the FOH mixer simply adjusts the mix to compensate for the lack of clarity or definition. But Broadway productions are more complicated. They are governed by what the show’s sound designer has specified for the overall sound of the show. We have also found that most touring productions are not capable of covering our large balcony with their systems. But now with the Bose RoomMatch system in place, it is no longer a problem. The dispersion patterns that Bose offers are extremely specific, so it was not a challenge to put together exactly the right configuration for our needs. And the response has been enthusiastic from both audience and touring sound engineers. It’s a success all around.”