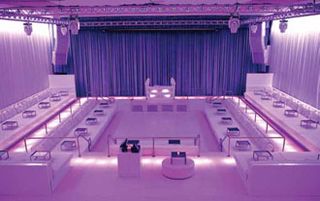 LA’s New Supperclub Location Is Dining Out On Sound

Supperclub boasts a 12-foot-tall line array, configured with a pair of EAW SC215 subs above and a pair below four EAW KF740P modules in each of two hangs.

The cavernous space, a former movie house built in 1935, took some taming, according to Michael Lacina of JK Sound. On the walls, a one-inch slab of recycled blue jeans, finished in white to match the décor of the Salle Neige (Snow Room), really helped with the acoustics. “When I got the owners to commit to that, I knew that we could win the battle of the seven-second decay, and that we could do it with a line array,” Lacina said. “But the line array had to be tall enough so that we could really get vertical control.”

In order to get 90 degrees of vertical dispersion, Lacina designed a 12-foot-tall array, configured with a pair of SC215 subs above and a pair below four KF740P modules in each of the two hangs. “The magic of the sound system is that its speakers and acoustics are designed to work together. There really was no need for a line array taller than four KF740s per side. That’s already plenty of output. But it’s only a four-foot-tall array. It’s losing vertical control fast below 300 Hz. So the acoustic walls take care of some of that. But a one-inch-thick acoustic material is not going to absorb the extra mid-bass punch you get from a great dance club system. That’s why we extended the height of the array with the two pairs of custom dual 15-inch flown subs. With this arrangement we have 90-degree vertical pattern control down to about 80 Hz.”

Although dinner has always been the main focus of Supperclub, its music director Michael Anthony reports that the Istanbul and Singapore locations demonstrated the revenue-generating potential of the club portion. So, he said, “We axed the proposed bar and that gave us a stage, and now we have a focal point.”

A stage also provided a location for the SB2001 21-inch subwoofers, which feed additional energy onto the dance floor. A pair of EAW Microwedges, under the control of a UX8800 processor, provide monitoring at the moveable DJ console, which is outfitted with Pioneer and Rane equipment. Another pair of Microwedges is available to expand the system to provide up to four discrete channels of monitoring for artist showcases.

A separate EAW system covers the Bar Rouge, which can be curtained off from the Salle Neige. The bar features two AX396 threeway speakers and a pair of DCS2 subwoofers, again under the control of a UX8800 processor.

On the face of it the system may appear to be overkill, Lacina said, but the size ensures good, clean sound: “The idea of the sound system is that it’s massive enough to be effortless.”