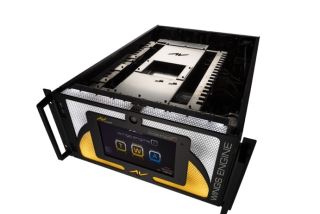 Production and operation workflow
An operator’s system can be distributed over multiple physical machines. The multi timeline and multi master design enables ‘hot backups’ to be saved for critical jobs.

Handling uncompressed video content
The next generation server ensures playback of up to three streams of 4K image sequences at up to 60fps per stream in real-time.

The server hosts AV Stumpfl’s media platform available for fixed or live environments. A dedicated operating system which is based on the Windows Embedded platform. The operating system features a dedicated operator desktop which shows no Windows elements but only AV Stumpfl’s proprietary functions such as a built in EDID manager, Backup&Restore and other system functions.