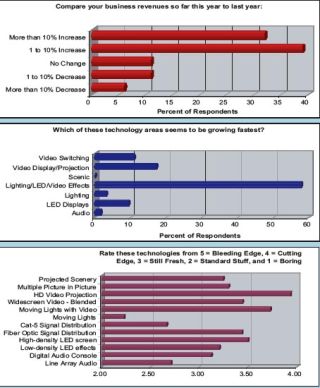 How is Your Year Shaping Up?
by Tom Stimson

In a recent survey of people in the Rental & Staging segment, we asked how business was going so far this year. 32% say they have seen more than a 10% growth in revenue for the first quarter compared to the same quarter last year. 39% claim between 1% and 10% increases. 62% expect the remainder of the year to exceed last years revenues. This is all very good news unless you are one of the 28% of respondents for whom business is flat or down.

We also asked which technology areas seem to be growing the fastest and it should be of no surprise that 58% of the respondents said Lighting/LED/Video Effects was number 1. It is interesting that there was no association of this fact with a growth in scenery, but then AV folks have never been much in the way of scenery.

In a related question we asked participants to rate a variety of applied technologies for their wow factor. HD Video Projection received the highest marks followed by Video Moving Lights and High-density LED. Fiber optic signal distribution came in neck and neck with blended widescreen video significant for a glue product (If you are still running copper to video projectors you are way behind the curve). Line Array Audio and Moving Lights registered just above ho-hum they have become standard tools.

Finally the survey asked for comments on the Next Big Thing in event staging. There were a couple of responses about HD Telepresence something stagers should learn about. Peter Emminger, Production Manager and owner of Yellow Light Live went one step beyond, I see holographic effects being the next major technological breakthrough. The only current hurdle is cost, there have been at least two shows where the stage set was made of holograms. As the cost comes down, and the technology becomes user-friendly we'll see car shows where the car is a 3d hologram, rotating live in space as the presenter interacts with the image. I think this may only be 2 - 3 years away.

Each month The Stimson Group conducts a short survey of AV industry professionals about a variety of topics. To participate in or comment on those surveys, email: surveys@trstimson.com