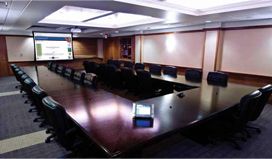 “Webcast training has been around for quite some time, but it’s really in the last year or two that it’s become routine for us,” observed Jim Schreiner, technology services director for Graham Hospital in Canton, IL. “These systems have really been a big blessing, as we’re able to train larger groups of people without travel and without setup time. It’s amazing how many of the meetings and educational conferences that we used to travel to are now webcast.”

To handle groups as large as 32 people at Graham Hospital, CTI designed an audioconferencing system based on two eight-channel Polycom Vortex conferencing units.

There’s an opportunity for many organizations to take advantage of the webcasting trend, sometimes with very minimal upgrades to their AV systems. According to Jimmy LoMonaco, rental sales manager for Conference Technologies, Inc. (CTI), the trend to webcast conferences and meetings stretches across many industries and trade groups. “We’ve been offering webcasting services for more than five years,” he explained, “but in the last year or so, interest has skyrocketed. People are seeing the value of offering a more cost-effective way to attend conferences and training sessions.”

To attend a webcast conference, it would seem that only a computer with an internet connection would be needed, but the largest webcasting services, including WebEx and Microsoft’s LiveMeeting, transmit the audio portion of a webcast over a telephone conference connection. “For a large group to connect into one of these sessions, you need a video system tied to the internet and a sound system with a telephone hybrid, “ said John Roy, who managed the Graham Hospital AV installations for CTI. “And if it’s a two-way teleconference, you need the electronics to handle multiple microphones, extraneous noise, and echo.”

To handle groups as large as 32 people, CTI designed an audioconferencing system based on two eightchannel Polycom Vortex conferencing units. “The Vortex gives us a full DSP, which we use for automatic mic mixing, source mixing, volume control, ambient noise cancellation, and echo cancellation,” said CTI installer and programmer Dustin Dietrich. “All the audio is automatically leveled and mixed, whether the system is used for an audioconference or a normal presentation.” The sound system also includes an EAW amplifier, 12 JBL ceiling speakers, and 10 Audio-Technica omnidirectional microphones. Dietrich also installed a Shure wireless lavaliere.

“Because our doctors take part in meetings with physician groups in Peoria, the system is a huge time saver,” Schreiner said. “We can join in electronically rather than having to put a group on the road.”

The Graham Hospital boardroom is unusual in that it uses two largescreen displays, one at each end of the room. There’s a 4,500-lumen Hitachi CPX1250 projector with a 100- inch diagonal Da-Lite screen, plus a 61-inch NEC plasma display. Schreiner says that, for smaller meetings, groups will gather around the plasma, and that gives this very large room a more intimate, friendly feeling. When the room is filled to capacity, they’ll turn on both displays and the second can help those in the back read smaller text on presentation slides. “We also have what we call breakaway video, where we’ll present two different images, one at one end of the room and one at the other,” Schreiner said. “For example, when we have our performance improvement training, they will show a PowerPoint on one screen and a video on the other.”

Presenters can use an 8.4-inch AMX Modero touchscreen remote control, wireless mouse, and keyboard anywhere they choose. There’s a dedicated PC located in an alcove at the front of the room, but most choose to present from their own laptops, and so CTI built three Extron pop-ups into the table with a VGA input, AC power, and a network connection.