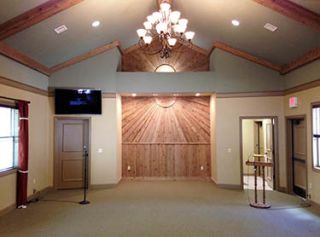 Long established in Michigan, the Craig K. Kempf Funeral Home recently expanded to Homer, MI, where it purchased a small funeral home. Kempf immediately brought in contractors to revitalize the existing structure, which itself had originally been a residential house, and ordered an expansion to provide a modestly larger chapel than the existing 30’ x 15’ room. Local AV firm Crookston Audio designed and installed a new sound reinforcement system for the new chapel and for the remodeled rooms. Based on its simplicity of installation, competitive pricing, and intuitive user interfaces, company president John Crookston specified an Ashly Pema 4125.70 integrated processor & four-channel amplifier together with Ashly RD-8C and WR-2 user controls.