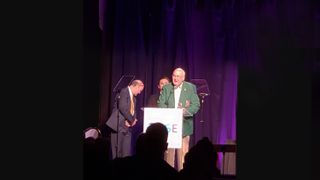 The Digital Signage Federation (DSF) awarded the first ever DSF Educator of the Year award to Alan C. Brawn, principal of Brawn Consulting, at the Digital Signage Expo APEX awards ceremony on March 28, in Las Vegas, Nevada. DSF Vice Chairman, Spencer Graham, who is Real Digital Media’s Business Development Manager for Higher Education, NA, presented the award. And the honors for Brawn did not stop there– as the DSF announced that going forward the award will be named the DSF Alan C. Brawn Educator of the Year Award.

“I am proud to announce that the inaugural Educator of the Year award will go to the person who has exemplified dedication to the craft of professional teaching and sharing of knowledge,” said Graham. “Through structured instruction to thoughtful whitepapers Alan exemplifies what it means to give of oneself to others.”