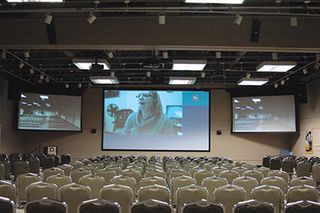 For now, much of this has taken place in the facility’s Abrams Auditorium, an approximately 300-seat venue that is used to display biographical video presentations on the general himself for the benefit of museum visitors, as well as host special events, receive new cadets, hold movie nights for those on base, and conduct videoconferences both large and small. As Keith Stengl of the Louisville-based Axxis (doing business as ISSG), the AV firm charged with designing and integrating the new systems into the space, puts it: Abrams Auditorium has fast become one of the busiest rooms on base.

The surround sound system features Bose processing and a combination of Bose Panarray LT-9403 and LT-9400 speakers, 402II fill speakers and dual MB24 subs, supported by Crown amplification. For meetings and presentations, the sound is converted to stereo audio.

To increase the space’s versatility, the Patton Museum’s management required Abrams Auditorium to be divisible; an airwall enables the large space to be separated to accommodate two different events simultaneously, with full AV support. “We have it so that the main camera for videoconferencing is in the back half of the room, and the other four are in the front half of the room,” Stengl explained. “We had to be able to tell the system: If they are using this camera, then it’s the back half of the room only when it’s divided.”

Stengl relays that the biggest challenge associated with this project was providing the flexibility that the museum’s leadership was asking for. “They wanted the room to do so many different things,” he said. “The challenge was to create a touch panel for the AMX control system that was simplified enough and still have all of these capabilities.” For the wireless mic control, for example, Axxis designed an actual on-screen visual of a mixer.

Early on, acoustics were an issue—especially when the space was filled with people. “This was a particularly excitable room that resulted in voices reverberating so aggressively that it overshadowed the sound system,” explained Steve Dickson, business development at acoustical solutions provider Primacoustic. “And with the energy congregating high in the room it made sense to address the ceiling area, especially since the museum did not want any treatment on the walls.” To address this, two Primacoustic Saturna hanging ceiling baffles are used to absorb audience noise and contribute to increased intelligibility.

Dickson believes that the “green wave” that acoustics product providers have embraced over the last several years has contributed to a greater understanding of the need for good acoustics in general. “As a result, every part of society is beginning to understand and embrace the importance of a great-sounding room and the health benefits derived from installing sound absorbing products,” he said. “I think it is safe to say that an acoustically treated room is no longer a fringe protocol. It is becoming a key component and a major consideration in both the design of new rooms and retrofits in existing facilities.”

Video, also, continues to be a high priority for facilities, and is used for pretty much any form of communication. Stengl notes that at Fort Knox, there are few meeting facilities that don’t feature some form of videoconferencing, something he likens to the technology’s decreasing price point combined with its increasing capabilities. He also points out that the Patton Museum’s requirement for 1080p resolution reflects a broader demand for high quality video overall: “And now with the new 4K panels coming out, we are going to see more demand for even higher resolutions.”