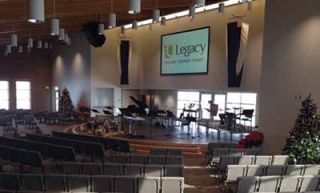 A long and storied history can be found along Interstate Route 94 heading either east or west across North Dakota. These are some of the most open and vast sections of the lower 48 in the U.S. Yet here is where historical roots run deep, almost as deep as any other part of America. On the northern edge of Bismarck, ND rises something quite modern, yet steeped in history nearly as old as the city itself.

An Allen & Heath GLD-80 console was selected based on strong reviews.

“One hundred and eight years ago, a group of doctors founded our church as the First Evangelical United Brethren—later the name was changed to the First United Methodist Church,” shared Dan Weigel, worship pastor for the church. “Originally, and for many years, the church had its own hospital,” he added. This past December, the congregation took occupancy of its new building, the third in its history. “Our last building was constructed 58 years ago, we out grew it 12 years back,” said Weigel. With a new building came a new name as well—a name befitting the long history of the congregation: Legacy United Methodist has begun its next chapter.

“We have an incredibly generous and motivated congregation that caught the vision for the new church,” related Weigel. Indeed, after five-plus years and a five-million- dollar construction, one would hope there would be some generosity put toward the audio system. “Bidding on the project started six years ago—the budgets were evolving until a grant came along in 2010,” stated Jay Griffin of Dakota Sound.

“Many churches can have a lengthy fundraising process, some others can be a hurry up and get it done timeline—flexibility is key,” Griffin added. When the church budgets were completed and set, Griffin and his team found themselves with a new choice to add to the original job spec, the Allen & Heath GL D-80 console had arrived on the scene to strong reviews and very positive word of mouth. “We changed midstream and put the GL D-80 in our bid. Its capabilities and price point gave us the winning advantage over the other bidders. We had been selling Allen & Heath analog mixers for years and were apprehensive at going full digital. About a half-hour into the demo we were like, ‘Wow, this is nice.’” But sounding nice on its own is one thing for a new and fully digital mixer. Integrating easily or seamlessly with other audio brands is where a reputation is won, or can be lost.

The new audio system for Legacy United Methodist includes a Bose RoomMatch audio system, eight Shure ULX-D wireless microphones, and 10 Shure SM-81 ambient microphones all powered by Bose PM 8500 8-channel amplifiers. In addition to the Allen & Heath GLD-80 console there is an AR 2412 mix rack and two AR-84 expander racks. You might think the AR 2412 and two AR-84 expander racks would be enough for any house of worship audio demands, but not with Pastor Dan Weigel running the service. Legacy Methodist also employs the Allen & Heath’s ME-1 personal mixer—eight of them. During any given Sunday service there is a worship team of five singers (all individual mics), acoustic and electric guitars, bass, piano, keyboards, drums, and a 10-piece string, brass, and woodwind orchestra section. “At first I was leery and a bit scared by what I was trying to do,” said Weigel, adding, “The A&H console brought it all together. The auxiliary sends have an overall control that can be configured multiple ways for ease of operation. Our old analog board required multiple aux sends, the GLD-80 digital board allows for one aux send for everything.”

The young pastor’s enthusiasm and the GLD-80 seem to have found some very positive commonality as well. “The Allen & Heath console allows me to keep the services fresh—I like to switch the music arrangements and the musicians around every week—the A&H strip assignments are so easy, all I do is slide my strip assignment on the big touch screen and I’m done! Of course I can do this with an analog board, but it’ll take forever. Plus I can save EQs and all my settings to a library and recall or flip my audio platform in a minute.”

Jay Griffin was also happy and relieved with the setup, stating: “Once the ME-1 system was set up and programmed the client was thrilled— especially since he initially had a preference for another personal mixer. I would not go with any other personal monitor. It integrates seamlessly with the GLD-80.”