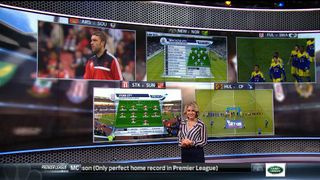 NBC Sports Group is a long-time Spyder user, beginning with 30 Rockefeller Plaza’s Studio 8G for Football Night in America in 2006. “We were the first broadcast entity to use Spyder for multiple layers and display,” says Randy Raddatz, vice president of sourcing and production services. Since ’06, NBC Sports has embraced the Spyder while relocating most of its production to the new facility in Stamford.

Studio 3 in Stamford boasts “the largest indoor broadcast wall in the world,” according to Raddatz, which forms the main backdrop in the space. Two Spyder X20 systems are required to drive the approximately 36 x 12-foot LCD projection wall comprised of 28 70-inch Barco OL Series projection modules in a 7 x 4 configuration. The Spyders also drive a 3D rear-projection wall designed by Jack Morton and located upstage center.

“The projection wall shows many of the feeds from various soccer matches or a highlights package from a specific game with graphics,” says Raddatz. “The layering aspect of the Spyder allows us to use this very large template space and maximize production flow, graphics, the visual presentation and data feeds of the games themselves. We can have limitless configurations of pictures, video and graphics.”

Raddatz points out that Spyder “helps us tell the story, display the story and enhance the story. It’s all in support of the content – it never takes over. Spyder’s flexibility, layering capabilities, usage of total template and ability to show things in a different configuration with very high quality and resolution make Spyder an awesome tool.”