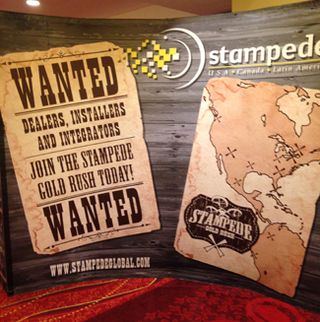 Stampede’s annual Vendors Summit was held on October 5 and 6, 2015 in Buffalo, NY.

So it’s not really a surprise that Stampede would invest so much of its agenda to drones—they’ve been pushing this technology for some time now, with vendors participating in the distributor’s Big Book of AV tour stops around the country and putting up a Drone Pavilion at InfoComm this past June, complete with a caged demo area to show these flying machines in action.

Of course, there is still a lot of skepticism about the relationship between drones and AV. While I was live tweeting the event on Tuesday, conversations were starting up about why integrators are doubtful to invest in drones, citing that the technology offers ‘limited’ uses. I myself was even hesitant to embrace this new technology at first, but the more I hear about the benefits and the connection to AV, the more open I am to it. I think the key is to look beyond the hype we read about drones in the media, and think of the practical solutions drones offer and how AV can have a hand in that—a point that was heavily emphasized during the presentations.

Kevin Kelly, president and COO at Stampede, said the prediction is that drones will become a nearly $100 billion opportunity, and that AV can play a big part in this growth. With over 10,000 possible applications for drones, Kelly said that when it comes to drones, we need to see AV as a piece in the big picture. “Stop thinking of a drone as an end all, be all product, but as a platform to hold a camera,” he said. “And cameras are a big part of our industry."

Kelly said that beyond military purposes, 29 percent of drones are used for other reasons, including filming at events, safety surveillance, and more. Mounting your camera to a drone, as well as providing command and control solutions, are important to the user, and Kelly emphasized that these are areas where AV companies excel and can help provide solutions specific for drones.

Stampede isn’t making a push for AV in drones just because it seems ‘cool’ though—as the data shows, the drone industry is growing exponentially, and it’s not stopping. Thomas Frey, a futurist with The DaVinci Institute, spoke to summit attendees about the future of drones, saying that future uses may include delivery, wildlife tracking, and more. A big use for drones will include helping firefighters battle wildfires by attaching sensors to the drones to pinpoint where the firefighters need to go to extinguish the flames faster.

Frey also reminded us that drones don’t just fly—they can roll, walk, climb, swim—you name it. Essentially, our future will finally involve the robotic droids that George Lucas created in Star Wars—I’ve waited a long time for this to happen.

Representatives from the Cleveland Research Company gave a more detailed account of where the drone industry is headed—“There’s two main things we want you to know: professionals in the drone industry want a complete solution, and the market is in early stages and accelerating,” said Josh Rowe, market research associate with the Cleveland Research Company.

Rowe said that right now, drone sales are at a 100 percent increase from last year, and will continue to rise until the industry hits critical mass. In 2015 alone, the industry has already sold 2.5 million units. They predict that by 2017, drones will be a far more prominent industry, so the focus for 2016 will be to educate interested users. This means that this is the best time for AV companies to get involved.