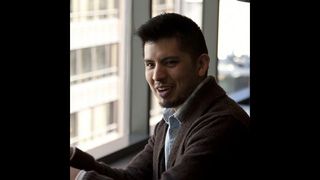 Why You Should Know Him: Skeuomorphism and visual noise aren’t just part of Mark Lozano’s vocabulary, but they encapsulate a unique and wholly modern vision for what a GUI should look like today. AVI-SPL snapped the talented designer up out of arts school while seeking out young blood with visual expertise for UI. The AV industry wasn’t a far call for Lozano, who had DJ’d on the side during college, and he had dabbled in electrical engineering in college before transitioning to design. His ability to read a technical drawing surely made him stand out.

Under the tutelage of David Thorson, senior manager of programming architecture, Lozano is grateful to feel that he’s always had complete creative freedom to try anything he can think of. In his early days with the firm, Lozano recalled how the 3D look, making buttons on a screen look like physical buttons, was expected, but he now looks back on this as, “messier than it needed to be.” Simplifying navigation is another main tenet he has grown to implement. Having as many buttons as you can with multiple tiers of navigation is a practice he has abandoned. “I think that’s the direction user interfaces as a whole are going, not just in what we’re doing. Mobile apps, websites, they’re all just getting simpler and simpler to use.”

How He Balances the Rigidness of UI Design: Making a lot of shiny “perfect looking” buttons can inherently weigh upon the artistically inclined. Lozano looked to create something more free form in his spare time, which took the form of hand lettering. Under his brand Eddy Mumbles, Lozano creates logos and branding for niche clients and has been commissioned for different art pieces; one recently for a company inside Chicago’s storied Merchandise Mart.

A sample of Lozano's hand lettering work. What He Sees For the Future: He’s anxious to see major control systems catch up on functionality in the way that web and mobile interfaces are leading in the make-everything-as-simple-as-possible movement. “That has a lot to do with changes in coding languages in the last couple years,” he noted. “Flash is completely gone. And that’s because it wouldn’t adapt, and new things came and made that easier. I’m looking to see what kind of technology Crestron, AMX, and Extron can bring that we can implement to make using these panels easier and controlling things easier.”

It’s only once in a while that a programmer he’s working with will have to break the news that a capability just isn’t available. He’s graced with a positive outlook on these scenarios though. “It’s always a little discouraging hearing that, but that’s the reality is that you have to work within your constraints.”

Get to know the rest of The Nine