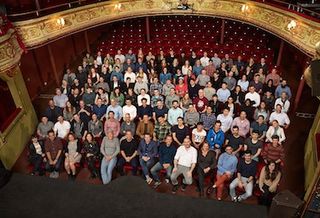 The B-Reel Creative Team.
Why You Need to Know Them: An ever-widening “team of technologists and storytellers creating new ways to connect brands and audiences,” B-Reel Creative is the place where far-fetched ideas are met with a question, “Who is going to pay for that,” not spoken in an incredulous tone, but merely enquiring which current or potential client will it suit the most. Dream it up, build it, use it. Nearly anything is workable among the members of this egalitarian tribe founded in Sweden by five creative, and expanding to six offices worldwide, staffed by 170 designers, writers, strategists, producers, and developers.

First Fika: It really is a Swedish company, founded on the precepts of that country’s ideals and hence operating on a lack of hierarchy and free-ranging coffee breaks, called Fikas. Several New York B-Reelers shared how this process works, and the freewheeling document-sharing collaboration sounds less like the chaos of a doomed startup and more like a collective consciousness of eager and capable contributors. The distinction is in what this and other innovators in the media design space have discovered: there are a lot of good ideas out there, and they work better when unimpeded by bureaucratic process.

But it Really is Mostly for the Creative: No one is saying this is the only way to do business, but it’s a lovely way to cultivate something that can really be called “new.” It’s harder and harder to be new in an era of limitless production tools and outlets, unless you listen to voices from various far reaches of creative use.

So Who Are These People? Let’s talk to some of them. Mike Potter has a film and video background, and took on the role that is loosely called “art director” after several freelance collaborations with B-Reel. But in keeping with the ever-shifting everything all around us, that role grows and changes with needs and interests. “B-Reel lets all of us have our dream job,” he said, “They’ll support anything you come up with.”

“Eliminating Process, Get it Done as Quickly as Possible.” Wes Falk, a producer, also started in film and video and studied marketing with the hopes of having a paying job. Coming from the mega corporate world into B-Reel, he’s glad to have escaped political and hierarchical project stalemates and see ideas readily come to fruition. “They pulled me from the world of the 30-second spot into this world, and it was unexpected, unintentional, and the best decision I ever made.”

Making Stuff Move With Code: They really do have to know what they’re doing, too. Eric Heaton has a programming background and has moved between art director and technology director roles at B-Reel. His days are often filled with troubleshooting and code fixes, but it’s balanced with hands-on project work. “It’s a good work/life balance, too. If you’re working late, you’re there because you want to be there.”