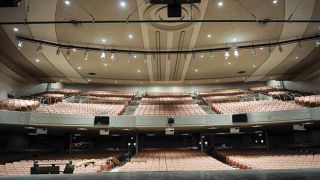 For many towns and cities around the country, the high school auditorium is more than just a facility for the school district—it’s the cultural center for the arts in the community. Such is the case with the historic Knowlton Auditorium in Austin, MN.

Part of the Austin School District, it was built as a community asset in 1937. The auditorium is connected to the high school’s gymnasium. When built, the auditorium was separated from the gym by a removable wall, so both spaces could be used for major events like graduation. A remodeling project completed in 1994 replaced the removable wall, with a less expensive fixed wall which reduced the usability of the space. In early 2015, the school district started a renovation project for the auditorium and gymnasium to upgrade the audio and video technology, improve the lighting, provide the space with an architectural “facelift,” and replace that wall with a new fire-rated partition.

The school district contracted with Dave Bridges at the architectural company ATS&R in Minneapolis to design the new technology systems and with Alpha Video and Audio in Eden Prairie, MN to integrate and install the systems. To successfully integrate the technology in the auditorium, Alpha Video needed expertise in both parts of its corporate name—audio and video.

Two Chief Manufacturing roll-top desks are installed at the back of the main floor to hold the mixing systems. Audio is mixed using a Roland M-480 digital audio mixing console. Electro-Voice wireless handheld microphones and Electro-Voice headworn microphones are available for the performers. New Electro-Voice speakers are also installed in the gymnasium.

Two 55-inch LED confidence monitors are installed on the balcony and two 80-inch displays were added to the lobby area to provide information to visitors and event attendees. Three displays are installed under the balcony to improve the sight lines.

To improve the ease of use, a Crestron control system is installed, which can be accessed by a 10.1-inch touchscreen control panel installed next to the mixing consoles, or by two iPads with Crestron apps.

Commenting on working with Alpha Video, Matt Miller focused on the service they received from Jake Remus, who was Alpha Video’s project manager for the installation. “I’ve been impressed with Jake Remus,” said Miller. “He did an excellent job in catering to the needs of our non-technical users and communicating with us to keep everything on schedule. And, since the project was completed, he has been very helpful to answer any technical-related questions or integration questions. I’ve been really impressed with his customer service.”