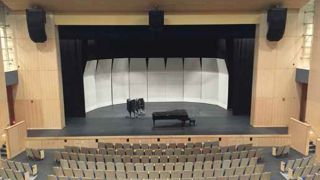 When officials in Clinton, CT determined that a renovation on the area’s aging public high school, The Morgan School, would cost more than a rebuild, a new 140,000-square-foot building was constructed. Officials relied on Jaffe Holden Acoustics and Masque Sound, a theatrical sound reinforcement and installation company, to design and outfit the school’s auditorium, gym, and lobby with the latest AV technology to meet today’s standards.

The main auditorium system is comprised of a Bose RoomMatch System, which utilizes selected coverage pattern line-array modules to avoid unwanted reflections from walls and other surfaces.

“The Morgan School has a long-standing tradition of musical theater performances, so when we constructed the new building, it was important to keep the tradition of live events at the new auditorium,” said Raymond Smith, band director and technical director at The Morgan School. “Ben Bausher at Jaffe Holden spec’d out great components for the system, and Masque Sound did an amazing job on the delivery and install. The installation included high-quality audio and video equipment that looks and sounds wonderful and fit within our budget.”

The new school boasts what is referred to as a ‘hub’—a gathering area, floor-to-ceiling windows in the second- and third-story classrooms, a 210-seat open food-court style cafeteria, as well as a learning commons/library. The installed system at The Morgan School’s main auditorium features both audio and video solutions, while the gym and lobby portions of the project are comprised of small independent audio-only systems.

The main auditorium system is comprised of a Bose RoomMatch System, which utilizes selected coverage pattern line-array modules to avoid unwanted reflections from walls and other surfaces. The system is made up of left, right, and center arrays with subs at the top. Fill speaker zones consist of front fills, under balcony, and over balcony speakers. All amplifiers derive their signal via Dante from the Symetrix DSP.

“The auditorium allows both a skilled and non-skilled operator to use the system via the Crestron control system,” said Ben Bausher.

A Draper Paragon series projection screen was installed, allowing for a 16:9 aspect ratio, while a Panasonic PT-DW17KU projector and ET-D75LE20 lens handle the projection duties. The two- or four-lamp modes on the projector are controlled by a Crestron control system, as well as the power mode of the projector.

“The auditorium allows both a skilled and non-skilled operator to use the system via the Crestron control system,” said Ben Bausher, CTS, senior consultant, Audio and Video Systems Group, Jaffe Holden. “The skilled operator simply has access to more control of the audio system with the addition of the Midas M32 console to the signal flow. While the non-skilled operator has limited access to control parameters, they can control both video switching and the levels of several microphone inputs. Overall, the system is able to be utilized for events ranging from a single speaker on stage to a full-scale concerts and musicals.”

“I was instrumental in designing the system at the old school some 30 years ago, so this project was very near and dear to my heart,” Smith said. “I can honestly say, the new system is spectacular. It’s using state-of-the-art, flexible technology that can easily be operated by the nonprofessional user. It’s a great design, and both Jaffe Holden and Masque Sound did a wonderful job. The system is top-notch all the way.”