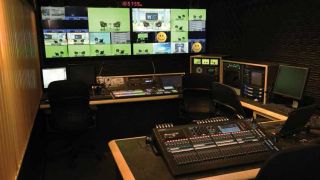 The video production facilities at NetApp, a data management and enterprise storage solutions company, needed a refresh. Based in the multinational company’s headquarters in Sunnyvale, CA, the studio is used to produce hundreds of live and recorded programs for employees and clients annually.

According to Mike Tyler, senior manager, global AV multimedia services at NetApp, video streaming and videoconferencing are “critically important” parts of the company’s communications. “We are so geographically spread out,” he explained. “Video is key to NetApp’s daily communications efforts. It’s important that we have an infrastructure that’s reliable, consistent, and able to keep up with demand.”

Built in 2005 with SD equipment, the studio took over conference room space on the third floor. As demand for productions grew and equipment began to fail, it became clear the studio needed to be upgraded to a full HD workflow, and ASG took on the project.

Due to the physical limitations of the existing walls, the studio control room was originally built much longer than wide. Racks of routing equipment and servers filled the short far wall, audio and TD stations were positioned close together in front of the far corner, and client seats were positioned on the long, empty wall behind the switcher. The result was a cramped, noisy work area with wasted space. The ASG integration team, which included engineers within the on-site managed services group, changed the layout completely, redesigning the entire control room around production efficiency and client comfort.

“In an effort to maximize space and avoid the cost of building new walls, David Lyon, one of the on-site engineers within our managed services team, developed NetApp’s new control room design based on the traditional layout of a broadcast production truck,” explained Dave Van Hoy, president of ASG. “Once we reoriented the control room, the space could support more crew and client seating.”

For prompter control, ASG installed an articulated Ergotron workstation, which allows access from multiple stations in the control room and simplifies operation for one or two-person crews. A new four-channel IFB allows clients or crew to speak to on-camera talent during live productions. The dedicated client space, which doubles as seating for a producer and director, offers enough desktop space for three people.

Another important aspect of the upgrade was lighting. The original incandescent studio lights burned very hot, taxing an air conditioning system designed to handle an office environment. A few Kino Flo fluorescent light fixtures had been installed earlier to alleviate some of the heat, but ASG designed a new lighting scheme with a full complement of Litepanels LED Fresnels and 1x1 panels.

“The system is brilliant in its design. We can literally create an infinite variety of sets without physically building them, storing them, or wasting valuable studio time staging for productions,” said Tyler. “Plus, the Plutonium system lets our team shoot and record dynamic and fully interactive multi-camera productions from start to finish—without the need for any post-production chromakeying or trying to match backgrounds with recorded camera movements.”