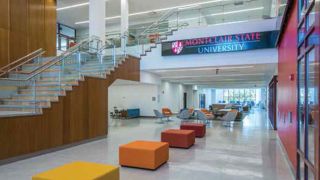 In a ribbon cutting ceremony on September 26, Montclair State University (MSU) formally opened its brand new, 105,000-square-foot School of Communication and Media—the fruition of the Montclair, NJ university’s goal of providing students with the finest tools with which to learn, in a facility engineered to adapt to and grow in step with future technologies.

Drawing upon the school’s close relationship with Sony, systems integrator KMH Integration equipped the building with some $9.6 million of professional-caliber technology from the brand and other top manufacturers. With facilities such as four broadcast-ready 4K and HD control rooms and studios, an IP-based radio production and broadcast facility, and screening space with 4K projection, the school affords students the opportunity to train on the some of the same equipment they will encounter in the real world.

The school is also a shining example of the growing convergence of AV and IT. “MSU’s new School of Communication represents a true convergence of IT, broadcast, production AV, and educational tools that support television, radio, and film production like no other facility,” said Kevin Henneman, president of KMH Integration. “You can share audio and video from any room in that facility; it can be brought in and out of the traditional broadcast and production environments, or vice-versa. The major classrooms, the presentation hall, the film screening theater, all have connectivity that tie into the broadcast core.”

Video originating from the school’s several HD studios can be transmitted over IP anywhere in the building.

According to Henneman, the school specifically requested a design that would utilize a category cable and fiber infrastructure to transport signals over IP throughout the building. “The infrastructure—all the fiber-optic and copper connectivity—was planned to be at the highest line speeds capable. So you’ve got Cat-6a that reaches out to every room and comes back to a central demarcation point in the central machine room. You’ve got single-mode fiber that does the same thing, and some of it is in use, because that’s the day-one plan.”

The overall plan covers multiple uses, but the primary use is visual education. Classrooms throughout the building are laid out to facilitate collaborative learning, and feature dual projector setups using Sony VPLFHZ65/W WUXGA laser projectors and Draper screens. Using the Crestron control system—which is integrated with an Evertz EQX with Magnum Control 3G routing platform in the central machine room—professors can intuitively pull up video from anywhere in the facility using a touchpanel, and display it alongside their lesson on the projection screen.

The ability to let as many students see what’s going on in the production facilities is unusually valuable given the quality of the equipment within them. The school boasts a 4K/UHD studio with Sony HDC4300 UHD broadcast cameras and a companion control room featuring the Sony XVS-7000 UHD production switcher used at the Rio Olympics, which was donated by NBC in conjunction with Sony. It also has two 1080i studios and control rooms featuring Sony HSC300 cameras and Sony MVS8000 and MVS6530 production switchers; one of the studios features the entire set from The Nightly Show With Larry Wilmore, a donation from Comedy Central following that program’s cancellation. There are also several radio production studios with equipment such as Telos Axia audio mixing control and management, Electro-Voice microphones, and Genelec Active studio monitor speakers. All of these facilities feature Dante-capable equipment and connectivity, enabling audio from them to be routed anywhere on the network.

In addition to the broadcast studios and classrooms, the school features a 187-seat presentation hall for events and screenings. The centerpieces of this room are a Sony SRXR515P 4K Cinema Projector and Stewart Filmscreen, with audio provided by QSC speakers and amplifiers and Biamp processing. For events, the room is equipped with Shure wireless mics, Listen Technologies assisted listening devices, and all audio is mixed through a Yamaha QL5 console. And, like many other spaces throughout the building, it features Sony BRCH900 PTZ cameras, so video feeds of anything going on in the room can be transmitted throughout the school, or even broadcast out.

Other facilities within the building include an engineering room, news room and studio with Avid Media Composer workstations, acting and dance studios, a performance studio, an audio post live performance studio, and several other conference, team, and green rooms. And, since almost every piece of equipment in these spaces is network connected, KMH can remotely monitor and troubleshoot all of the school’s systems, making sure its more than 40 rooms stay operational.

The biggest key, according to Henneman, however, is the project’s future-proof nature. “There’s additional connectivity, so as they grow, and as they decide to modify the operations or add certain classroom environments, they can do so pretty easily. They have some built-in flexibility for the future that will not limit them,” he said. “And Montclair is set up for that, based on the traditional IT backbone that was installed. But it was not installed just for IT and business administrative purposes; it was intended to be, and is being used right now, to move media, and it’s going to grow as they progress.

“That’s the really cool thing about that project and that facility: the school thought about that. And when we sat down with them, we didn’t change a lot really, but we did sort of pull the concepts into reality and say ‘This is how it’s got to get built so that we can do that, so that you can have that future proofing.’”

Henneman said that this closeness of collaboration between his team and the school’s IT staff was a bright point in working on the project. “Over the last 10 years, we’re used to coordinating with IT,” he said. “But I have to say that it’s still a challenge; there’s still this little bit of a disconnect between the IT folks and the traditional AV or broadcast folks in the sense that they’re still coming at this from two different worlds. There are some of our customers that we’ve been able to work very closely with and have a mutual respect and understanding of each other’s disciplines, and I’ve got to say that’s exactly what happened; their IT department was tremendous. They got it.”

For an installation that combines the best of today’s capabilities with the capacity to accommodate the progress of tomorrow, MSU’s School of Communication and Media is certainly a great place for future leaders to learn.