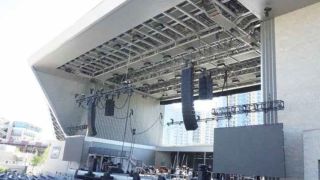 Noise levels are an issue at Nashville’s Ascend Amphitheater since the park is located among commercial and residential buildings. To remain compliant with city restrictions, Morris typically employs d&b’s NoizCalc predictive software to precisely define the system’s coverage. Granular control is achieved by wiring one box per amplifier and using ArrayProcessing in d&b’s ArrayCalc software.

There is a saying that a shark must constantly swim or else it might drown. The same might be said of music and entertainment venues. Whether they are new, old, or revitalized, they need to stay up to date with production technology or they may risk losing their audience.

Metro Nashville Davidson County unveiled Riverfront Park and Ascend Amphitheater in 2015 on the last piece of green space in downtown Nashville, an 11-acre site along the Cumberland River formerly occupied by a power plant. The venue, which has a capacity close to 7,000 in permanent and temporary lawn seating and premium boxes, is managed by Live Nation.

Like many such venues throughout North America, Ascend Amphitheater has no permanently installed production sound system. Instead, touring artists bring in their own rigs. For other events, the city calls on a local provider such as Morris, which has handled Fourth of July events, the CMA Music Festival, and symphony concerts at the venue since it opened.

“Generically, it has been a d&b audiotechnik J rig,” said Joseph Logsdon, account manager at Morris. The company began outfitting tours for the country band Alabama 25 years ago, and in 2013, added an integration division.

The rig size may vary, but for the July 4th show, for example, “We did 32 boxes of J—a combination of J8s and J12s—and 32 ground-stacked J-SUBs. Then we did a side hang of d&b Vs plus V10P front fills,” Logsdon said.

Noise levels are an issue at the venue since the park is located among commercial and residential buildings. To remain compliant with city restrictions, Morris typically employs d&b’s NoizCalc predictive software to precisely define the system’s coverage. Granular control is achieved by wiring one box per amplifier and using ArrayProcessing in d&b’s ArrayCalc software. “Having as much energy inside [the venue] where you need it and as little outside that space as possible has been helpful,” he said.

Morris is an official d&b integration partner, for one simple reason, according to Logsdon: “It sounds better without a bunch of work. We can send a rig out with one of our young guys, a small rig for a corporate show, and it will sound fantastic.”

On a charity fundraiser last year, he added, “One of the people raising the money was running around right in front of the d&b rig with a wireless mic and it didn’t feed back. That just doesn’t happen with other boxes.”

“We had a shootout with all the major companies when we opened the venue and ended up going with Meyer Sound,” said Tony Leong, production manager for APE. The multi-use venue, which stages everything from spoken word to music to comedy, initially installed a Meyer Sound MILO rig, but recently switched it out for the company’s new LYON system.

Supplied by Pro Media/UltraSound, 14 flown LYON modules per side are complemented by ground-stacked 1100-LFC low-frequency control elements. Three 700- HP subwoofers are also flown above center stage and there are additional Meyer boxes for fill.

“We have 12 subs per side, which is plenty of firepower. They take a lot of the weight off the LYON’s shoulders,” Leong said. “Bands will say, ‘We’re bringing extra subs in case we need them.’ I tell them, you do not need them.”

Meyer’s Galileo Callisto system handles loudspeaker management. “The UltraSound crew sat with the Meyer folks for three or four days and really tuned the sound system to our room,” he said. Previously, audience members at the bar or the back of the balcony might feel a little disconnected from the stage. “But these LYONs hit you with the same power and the same presence, front or back. There’s even coverage and no need for delays. You feel like it’s right in front of you, but without being overbearing.”

Visiting artists have been impressed, reported Leong. “And we’ve had engineers walk away and say, ‘I’m going to add the LYON system to our rider.’”

Canada’s 2,500-seat Southern Alberta Jubilee Auditorium (SAJA) in Calgary underwent a renovation costing over $90 million coinciding with the province’s centennial in 2005. But the building—which has a northern twin in Edmonton—was opened in 1955 and its construction reflects an older aesthetic.

“Some of the walls are three feet thick, so getting any wireless signal from one place to another is nearly impossible,” said Mark Belkie, the SAJA’s technical director–audio. Toward the end of 2016, Belkie and his team installed Clear-Com’s new FreeSpeak II (FSII), a key component of a combined wired/wireless intercom system comprising the Clear-Com Eclipse HX-Median Digital Matrix system, two FSII cards, 25 FSII wireless beltpacks, 20 wired partyline intercom positions, and distributed transceiver antennas.

During the renovation, said Belkie, “We ran Cat-5/6 cable everywhere in the building.” That enables him to add an antenna anywhere that wireless reception is a problem and run it back to the Eclipse HX.

“We also plugged the Clear-Com system into part of our paging system. With the V-Series Panels, I can page anywhere I want to through our existing paging system, which we’re looking to upgrade soon.”

The SAJA hosts a broad range of events, including opera, ballet, touring musical and comedy artists, and theater productions. A Broadway-style show may roll in with over 40 channels of wireless microphones. “But FreeSpeak II is wonderful; I don’t have to worry about it,” said Belkie, who noted that it operates at 1.9 GHz, well above the range of a typical wireless mic system. “It’s a completely different world.”

But the best thing about the upgrade? “I don’t hear about any problems anymore,” said Belkie. “I used to hear, ‘the comms have dropped off.’ Now I don’t hear anything—which is fantastic.”

Steve Harvey (sharvey.prosound@gmail.com) is editor-at-large for Pro Sound News and also contributes to TV Technology, MIX, and other NewBay titles. He has worked in the pro audio industry since 1980.

There’s nothing that beats the thrill and experience of a live concert experience for music lovers, yet the reality is that attending a concert can oftentimes be complicated. There are tickets to secure, logistics to plan, business schedules and personal obligations to coordinate around. And for some people, the experience of a crowded music venue just isn’t all that pleasant sometimes.

As video on demand and live streaming consumption models have proliferated in home entertainment, there’s a growing fad to bring the concert into the home. The so-called “couch tour” is being embraced by young live music consumers and furthered by bands like Metallica, Bruce Springsteen, Pearl Jam, Phish, Red Hot Chili Peppers and many others. Live production companies, music festivals, and venues are catering to an appetite for pay-per-view revenue sources.

Qello Concerts is an OTT streaming service for full-length concerts and music documentaries on demand, a sort of Netflix for live music. Qello recently launched a Live section to further support the couch tour movement. Venues like the Capitol Theater in Port Chester, NY and Brooklyn Bowl have invested in the production gear, and via a live streaming partner have select concerts available for purchase by home viewers on any mobile device and all the major OTT boxes.

So how does it work for a venue? You’ve got some cameras, maybe just one even, there’s a producer staffed, in-house or outsourced to a production company, there’s encoding either on premise or in the cloud, and from there, it’s mostly bandwidth. There is some paperwork involved, having the artist sign off, sometimes the label needs to sign off, and Qello will cover the performing rights organizations.

The benefit for Qello is that a venue can help drive fans to the platform and grow its subscriber base, along with growing its content sources and thus enhancing the service.

The best part for a venue is that partnering with Qello is free. “We’re not asking [partners] for a fee to use our service because we think we’re going to get people to subscribe,” explained Rich Johnson, co-founder and chief revenue officer at Qello. “We’re just saying, ‘hey, you deliver great audiovisual music to us, we’ll deliver a flawless experience, and let’s just call it a day.’”
—Lindsey Adler