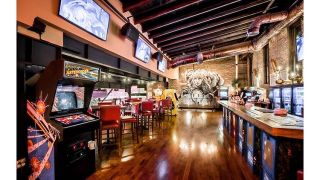 Ayre Productions of Chicago, IL, recently installed a full complement of Martin Audio CDD speakers in the popular new nightspot, Headquarters Beercade Nashville. Located in downtown Nashville, the bar/restaurant serves custom and craft beers, cocktails, light fare, and has 32 vintage arcade games, all of which are free for customers.

“This was a ground-up build…they wanted a dedicated sound system for the performance space so the venue could host bands like most every place in downtown Nashville,” said Ayre’s John Wagner

The performance area at the end of the large main room includes a DJ booth which can be removed and replaced with a portable stage equipped with one Martin Audio CDD15 and two CSX212 subs flown per side, pointed toward the entrance. Complementing that setup are four CDD12’s hung from the ceiling at the sides and back of the room firing into the center.

According to Wagner, there’s a mezzanine over the entry area with a separate bar where they mounted three CDD8’s underneath for maximum coverage of the club’s entryway. In the mezzanine itself, there have two CDD12’s wall-mounted on the higher level and two CDD6’s lower down, all firing toward the bar, with one CSX212 sub on the floor. Finally, they also mounted a CDD10-WR outside the club facing the street because there are no noise limits in downtown Nashville.

“Amplification includes Lab Gruppen D80:4L and IPD 2400 amps with Lake processing, and everything is wired in true stereo throughout the building so it really sounds amazing wherever you’re standing,” exclaimed Wagner.

On the video side, the club is equipped with two 55”, two 65”, and two 70” Samsung televisions along with a 200” projection screen and Vivitek projector.