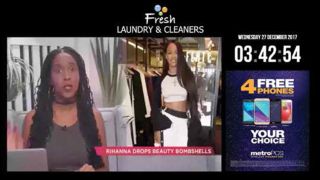 If you’ve ever used a laundromat, you probably soon realized you needed to come equipped with something to kill time—either your smartphone, tablet, or at the very least, a book. These are all great distractions during the seemingly interminable wash and dry cycles. By the time you pull stuff out of the dryer, you are more than ready to spring into action at the folding table. That is precisely where Full Cycle Channel also springs into action.

Full Cycle Engagement & Entertainment Channel is a digital out-of-home (DOOH) video network that, according to the company, is the first and only soon-to-be national DOOH network for laundromats. It is ad supported and taps into this captive audience who typically spend between 60 and 90 minutes on the premises. According to president and chief revenue officer Ernie Renzulli, the folding table area is the sweet spot when hands are occupied and eyes, hopefully, are riveted to Full Cycle’s content.

“When we are assessing a location for viability, we have to get a position by the folding table,” Renzulli said. “If we can’t hang a display there, we know we won’t get the viewership we need. By sticking to that, we can be confident when we’re talking to potential advertisers. We also look for a laundromat with a street location, about 3,000-4,000 square feet, and high-speed internet.”

Approximately two years ago, Renzulli, a media veteran who was working in DOOH for golf courses, connected with LG Commercial Laundry through an ad agency contact. Since LG makes both high-definition displays as well as washing machines and dryers, the synergy was perfect and essential to infiltrating the challenging laundromat market. Full Cycle was born and off to corner the market.

While laundromats are a multi-billion-dollar industry in U.S., owners are hard to get an audience with. Some just have a few locations, others have 50 to 60 stores. Many fly under the radar, often not even setting foot in their locations, which makes for a challenging sales process. However, with the LG partnership, Full Cycle could leverage their well-established network of owners, as well as preferred pricing on LG’s 49-inch displays. Once Renzulli gets the meeting, it’s not difficult to convince the laundromat owner of the benefits of Full Cycle media.

“Right off the bat, they ask ‘How much will this cost me,’ and I say “Nothing,” because the ad sponsors foot the bill for software, hardware, and the content,” Renzulli said. “So, without spending a dime, they get a completely turnkey service that provides their customers with entertainment and information that makes the whole customer experience better. We provide the display, all the hardware, software, and content. That’s a great deal that gets even better when they find out they get a share of the revenue if their location meets a traffic quota.”

Part of what makes the content so engaging is that Renzulli knows media inside and out, having spent a long career in it including stints as VP publisher of the Robb Report and advertising director at Playboy before moving on to DOOH. With his expertise, he was able to carefully choose Full Cycle’s video partners. They include big names—Univision, Telemundo, Roker Media, Clevver, and Screenfeed—all of which he feels provide the perfect mix for laundromat customers.

“DOOH is really exploding. It’s now a $7-billion-plus industry with 120 million digital screens active in North America, delivering a larger audience of adults under 50 than either primetime TV or top cable networks,” said Renzulli. “The key is concise, interesting content lasting between 60 and 90 seconds, such as Top 10 lists, pop culture bits, celebrity and entertainment news, and DIY tips. And it needs to be targeted and relevant.”

The largest demographic in urban-metropolitan laundromats is Hispanic women, which is why a third of Full Cycle’s content is in Spanish. So, after having launched 20 locations as a test in the New York City area, they are planning an additional 100 high-traffic, premium laundromats in Los Angeles in the first and second quarters of 2018, with a national rollout to soon follow in key Hispanic markets, once they secure funding.

As a segment wielding growing purchasing clout, Hispanics are a key target for advertisers. Full Cycle is wooing advertisers looking to reach them based not only on the 60-90-minute dwell time premise, but also on average traffic per location, and the other inherent benefits of DOOH. Unlike traditional media or other digital media, it’s impervious to ad blocking, bot fraud, time-shifting, commercial zapping, and ad clutter.

Renzulli explained, “We give advertisers the flexibility of 15-, 30-, or 60-second slots. Their ad is full screen, with the potential of being seen six times during the ‘captivity cycle.’ And soon, we’ll be adding geo-targeted digital coupons that go directly to the customers when they are in the laundromat. This brings everything full circle. As we get up to scale, we’re confident we’ll be a slam dunk for advertisers.”

As DOOH continues to grow, Renzulli says he might be tempted to pursue other unique applications. But, for now, he and his team have a busy couple of years ahead of them ensuring their unique premise fully dominates the laundromat industry. The forecast is pretty optimistic.