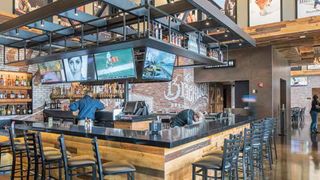 With the evolution of distributed everything, it’s no surprise distributed audio is rapidly changing in the hospitality industry—and it’s clear user interface and aesthetics are now a top priority. We’re living in a BYOD (bring your own device) world and hospitality end users expect manufacturers to adapt to their platforms, rather than the other way around. While they’re at it, manufacturers better bring the “pretty”—after all, hospitality is all about the visual, and they don’t want clunky AV equipment cluttering up their space. We asked leading audio experts for their thoughts on developments and trends in distributed audio, and here’s what they had to say:

QSC’s Q-SYS UCI controls the volume on 25 LCD monitors at the Alamo Drafthouse in Omaha, NB.

How have the interface and control in distributed audio grown in importance?

“We can look at distributed audio in the classical sense as a group of acoustic devices connected to amplifiers to provide even coverage in a given space. However, in today’s multimedia environment, distributed content is really the key phrase, as audio is simply one component of the overall multimedia experience in hospitality. The control of distributed media, and the user interface that provides the ability to control the distributed signal, continues to evolve into simpler and more cost-effective solutions. Ethernet-based distribution and control, coupled with the adoption of IT standards by the AV industry, have made this evolution possible.”
—Michael J. Kurcab, CTS, global market manager, hotels/casinos, Harman Professional Solutions

“The importance of control of audio systems has grown exponentially over the past five years or so. Now, end users expect to be able to control their environments without having to learn a new system. They are familiar with common devices such as iPads, iOS, or Android phones, and want to be able to use a similar interface rather than a dedicated audio or system controller that can require training or learning curves. The question is often asked, ‘Why should I have to buy a dedicated control system when every person who comes into this room carries a smart device with Wi-Fi, Bluetooth, and oftentimes IR, which they already understand, and are capable of controlling a system?’”
—Steve Seable, systems application engineer, Yamaha Commercial

How are manufacturers innovating with these features?

“Manufacturers have been adding a lot of apps for iOS and Android; we call it BYOD, and have found end users are far more successful, and less reluctant to engage using their own devices where they are comfortable navigating the interface. Another added benefit for end users is that many of these applications can be set up or modified by any audio integrator, and do not require a long learning curve or understanding of a specific coding system. The simplification of the programming creates significant cost savings not only on the original system commissioning, but when future changes are required.”
—Steve Seable

“Today, manufacturers can offer a wider variety of interfaces across the price/performance spectrum. In the hospitality sector, this allows select service hotels to benefit from using multimedia content, traditionally only found in full-service properties; hotels can enhance the guest experience while giving staff an easy way to control the audio to accommodate special requests or events. Additionally, the process to distribute signals throughout a space is more economical. Asymmetrical content matrices using standard IT infrastructure have eliminated the need for large, fixed-configuration, digital media routing platforms. This lowers total cost of ownership, makes upgrading easier, and provides scalability on a much more granular level. As more audio devices become network appliances, there will continue to be more innovation in this space.”
—Michael J. Kurcab

What other demands are hospitality clients asking for with this category?

Yamaha’s zoned speakers can be controlled wirelessly by multiple users at the Cape May Winery in southern New Jersey.

“In hospitality, there is an increased need for facility-wide audio and control solutions (messaging, paging, touchscreen controllers, amplifiers, distributed loudspeakers, etc.) as more ancillary zones are being integrated into a wider system. With that comes more complexity and the increased desire to utilize one manufacturer, with one platform-based solution that can easily integrate with all of their networked connected assets, including telephony and other IT hardware and software platforms. In terms of control, end users expect a single control interface to interact with their entire system, regardless of how many vendors are used to create the system. Hospitality management also expects remote management and control capability to easily anticipate any problems and troubleshoot.”
—Martin Barbour, product manager for installed systems, QSC

“Outside of the transport and control of the audio signal, aesthetics of the acoustic device in the space continues to be a key driver in deciding how audio is delivered into the environment. I am also very happy to say that sound quality is beginning to make a comeback. For a short while, it seemed that the idea of ‘good enough’ was the trend. With higher resolution formats in both audio and video becoming the norm due to increased bandwidth capabilities of networks, we are seeing a return to quality. This makes the need for properly designed loudspeaker systems using high-quality components a necessity in this space.”
—Michael J. Kurcab

“Clients need good, clean aesthetics in their systems. Businesses are not building for functionality alone these days; as you look at restaurants and hotels, you see great architectural features. The audio system has to be designed with an eye on beauty as well as functionality. If you spend a lot of time traveling, you see airports, for example, are often times filled with great local artwork. Gone are the days of stark, square-boxed terminals with dropped tile ceilings. Now, you see open spaces with lots of architectural flair and the sound equipment should be designed to enhance the feelings created in the space, rather than compromised to fill a need. Speakers need to be attractive, and control is expected to be simple to operate and implement.”
—Steve Seable