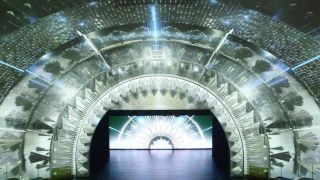 New for this season's performances is one of the world's largest 8K LED video walls. The 2017 production of the Christmas Spectacular Starring the Radio City Rockettes has undergone a complete technological overhaul. The entire production has been enhanced with updated technology including a brand-new 8K LED wall and, for the first time ever, digital projection mapping that extends to all eight of Radio City Music Hall’s iconic proscenium arches that make audiences feel like they are part of the show.

Technological enhancements in this year’s Christmas Spectacular include updated graphics in every production number, as well as complete visual transformations of scenes such as the energetic tap number, “The Twelve Days of Christmas,” “Here Comes Santa Claus,” and the finale number, “Snow.” During the show, the venue’s iconic proscenium arches have imagery projected onto them using advanced 14K digital mapping technology. The extension of the digital mapping, which previously covered four arches, immerses the entire audience in the action—everyone from the orchestra to the last row of the third mezzanine is enveloped in the holiday cheer that the Christmas Spectacular delivers throughout the 90-minute production. Additionally, the LED wall that serves as the backdrop for the Christmas Spectacular has been upgraded and is now one of the largest 8K-resolution LED screens in the world.

“Fans will be awed by the updated technology in this year’s Christmas Spectacular,” said Larry Sedwick, senior vice president of production, The Madison Square Garden Company. “We’ve expanded upon the existing projections to create a wholly immersive experience for our fans from the first row to the third mezzanine. It’s truly the most immersive theatergoing experience available in New York and beyond.”

14K projection mapping covers all eight of Radio City's iconic proscenium arches. “As content creators, we’ve had the privilege of working on many large scale architectural projections from the Vatican to the Empire State Building, to the Sydney Opera House,” said Matty Dowlen, chief of production, Obscura Digital. “We’re honored to now work on something as iconic and beloved as the Christmas Spectacular Starring the Radio City Rockettes.”

Notable projects include various Empire State Building projections including the Oceanic Preservation Society’s film “Racing Extinction,” CNN’s election night projections, and the Harper’s Bazaar 150th anniversary; a YouTube display on the interior and exterior of the Sydney Opera House; and a contemporary artistic interpretation of Pope Francis’ Encyclical projected onto St. Peter’s Basilica in the Vatican. The 2017 production marks Obscura’s first collaboration with the Christmas Spectacular and Radio City Music Hall and their work will be incorporated throughout the production—as brand new creative content for numbers such as “The 12 Days of Christmas,” “Here Comes Santa Claus,” “Snow,” and the orchestra’s prelude, the finale, and the curtain call.

Multimedia design studio, batwin + robin, which is led by Linda Batwin and Robin Silvestri, has designed for the Christmas Spectacular for more than 15 years, creating 3D backgrounds and video EFX for Radio City’s LED wall, as well as introducing digital projection mapping on the venue’s proscenium arches. In addition to their work on the Christmas Spectacular Starring the Radio City Rockettes, batwin + robin has designed 3D mapped projections for the NY Knicks and NY Rangers at Madison Square Garden; created numerous media experiences and interactives for live events, museums, and culture centers, including the American Museum of Natural History; and have designed projections for more than 25 Broadway and Off-Broadway productions. In the 2017 production of the Christmas Spectacular, batwin + robin is responsible for fully recreating and enhancing the content on both the LED wall and the proscenium arches for fan favorite numbers such as “Sleigh Ride,” “New York at Christmas,” the North Pole scene, “Rag Dolls,” and “Living Nativity.”